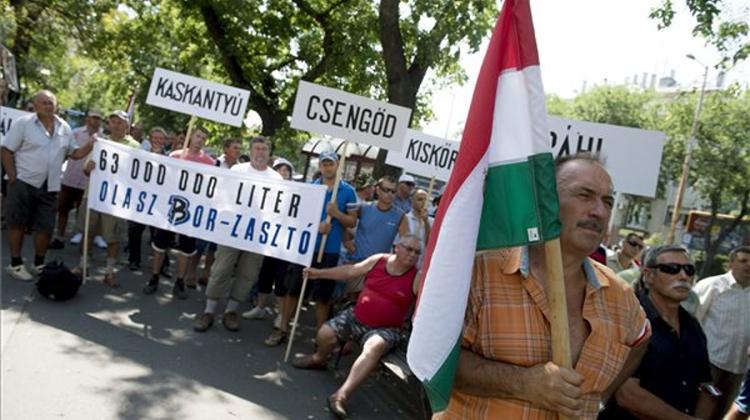 Grape growers from central and southern Hungary’s Kunság region protested at the Italian embassy in Budapest against what they say is a large influx of Italian imported wine. The demonstration was organised by the interest-protection association of grape growers who say cheap Italian imports make it impossible for Kunság winemakers to survive in the market.

László Budavári, representing the grape growers, told a crowd of around 200 people that the imported wine arriving from Italy to Hungary must surely be chemically processed because it is not possible to make proper wine for as cheap as 24 euro cents per litre. He called on the government to defend Hungarian agricultural producers and also consumers from imported counterfeit products.

The protesters submitted a petition to the Italian ambassador calling on his government to prevent wine counterfeiting in order to meet European standards.

Radical nationalist Jobbik criticised the Hungarian government for not taking effective steps to prevent cheap wine imports over the past several years.

Jobbik lawmaker Zoltán Magyar said that several of the Hungarian companies involved in Italian wine imports are said to be “big Fidesz allies”, so there could be also political reasons for the government’s failure to intervene.