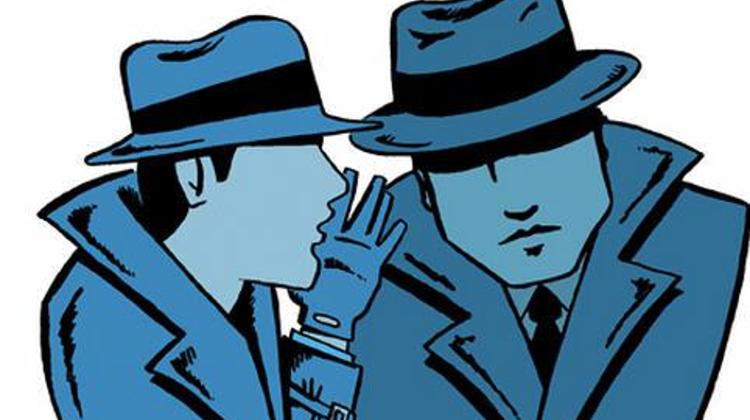 Hungarian intelligence has also been busy in the Hungarian-inhabited parts of the Subcarpathian region of Ukraine. Reading this portion of Lázár’s speech, I gained the distinct impression that in this border region secret agents are busy feeding the Hungarian minority’s dissatisfaction.

The Orbán government expects, perhaps even hopes for, a conflict between Ukrainians and Hungarians, which might give Hungary an opportunity to demand a “solution” to the problem. Only yesterday Magyar Közlöny (Official Gazette) reported that this year the Hungarian government has provided 116 million forints “for the training of civilian guards,” who are supposed to defend Hungarians against Ukrainian aggression.

Lázár in his speech admitted that the Ukrainian government strenuously objects to the Hungarian government’s meddling in the country’s affairs. Indeed, the Orbán government treats Ukraine like a state from whose collapse Hungary might profit.

Hungarian intelligence is equally busy, according to Lázár, in Romania. What agents are trying to determine is the exact relationship between Romania and the United States because “we know that the U.S. is very much involved in Romanian domestic politics” but “we don’t yet quite understand the nature of this relationship.” I assume there are two aspects of U.S.-Romanian relations that worry the Orbán government: (1) the two countries’ coordinated anti-Russian policies and (2) a possible anti-Hungarian understanding between the two countries.

The third neighbor, Croatia, is also a country that is antagonistic toward Hungary. There the authorities try to discredit the country through attacks on Hungarian businessmen. What Lázár has in mind is the charge of bribery against Zsolt Hernádi, CEO of MOL, in connection with Ivo Sanader’s case, which ended in an eight-year prison sentence for the former prime minister. Since Croatia’s constitutional court only today overruled the verdict, Hernádi’s troubles are postponed, at least for a while.

As Lázár put it, “of the successor states of the former kingdom” present-day Hungary has unruffled relations only with Serbia and Slovakia. If we take this comment literally, then something must also be amiss in Austrian-Hungarian and Slovenian-Hungarian relations as well.

Lázár spent quite a bit of time on Hungary’s relations with the United States. “American-Hungarian relations, which have deteriorated significantly in the past few years and which at the moment cannot be said to be good,” make the work of the Hungarian intelligence community very difficult due to its former reliance on U.S. intelligence sources.

Because the friction between the United States and Hungary developed as a result of Washington’s assessment of the domestic situation in Hungary, “the Information Office [the official name of the secret service] has to pay attention to accusations which through the western media are designed to discredit Hungary.”

In plain English, Hungarian intelligence officers are following the activities of those people who in one way or the other pass information on to media outlets critical of the Orbán government. Lázár proudly announced that “several campaigns have taken place in the past few years against Hungary, which have been identified.

” These foreign critics “unfortunately had their domestic allies, but the intelligence community could easily detect the channels through which incorrect and false information was transmitted.” Mind you, elsewhere in the speech Lázár called attention to the law that forbids intelligence officers from conducting any business at home.

The Hungarian intelligence service plays not only defense but offense as well. Lázár finished his coverage of the antagonistic media with this sentence: “It is no secret that the Information Office must take part in the work that will change the image of Hungary in the western world.” So, intelligence officers are being used to spread pro-Orbán propaganda abroad.

The first fruits of this effort was athe German DGSAP report titled “Hungary in the Media, 2010-2014: Critical Reflections on Coverage in the Press and Media,” compiled with the active help of Klaus von Dohnanyi, the former socialist mayor of Berlin.

The European Union is also a target of Hungarian intelligence. In fact, Lázár instructed the Information Office to find out as much as possible about those groups who turn to Brussels for redress of the allegedly discriminatory practices of the Hungarian government.

Lázár is very proud that they managed to learn who was responsible for some of the infringement procedures against Hungary. Thanks to Lázár, we now know that there are currently 65 infringement procedures in the works. Lázár finds the lobbying activities that take place in Brussels “shocking” because “they are conducted against Hungary and the work of the Hungarian legislature.”

Unfortunately, the intelligence community has to take up this burden because, until recently, Hungary was unable to successfully represent its own interests in Brussels, unlike Slovakia, Romania or Poland.

The reason for Hungary’s poor performance in Brussels was the less than satisfactory work of Hungary’s Permanent Representation to the European Union, whose “most important task is to present and assert Hungarian interests and sectoral policies in the European Union.” Not long ago responsibility for this permanent mission in Brussels was moved from the foreign ministry to the office of the prime minister, under the supervision of János Lázár himself. Lázár commented on the move.

Two of the neighbors reacted sharply to Lázár’s revelations about Hungarian intelligence activities in their countries. The Hungarian ambassador to Ukraine was called into the Ukrainian foreign ministry where deputy foreign minister Natalia Halibarenko expressed her country’s worries about Hungary’s intentions.

She said that conducting intelligence activities in her country without first informing the Ukrainian intelligence service was unacceptable. Nikolai Sungurovskii, the director of an important Ukrainian think tank, the Razumkov Center, expressed his opinion that Hungarian policies toward Ukraine pose a danger and that they may lead to a massive Hungarian separatist movement with possible Hungarian involvement. In fact, according to reports, the Hungarian government is prepared for a large Hungarian exodus from Ukraine.

Romanian-Hungarian relations have been rocky for a long time, but the presence of the former Romanian member of parliament, Attila Markó, in Hungary has exacerbated the situation. He is one of the many Romanian politicians who are being accused of corruption.

I can’t pass judgment on his guilt or innocence, but I can say that Romanians have been taking corruption seriously lately and the number of arrests is very high. Markó escaped to Hungary, which irritates Bucharest to no end, especially since there is a European arrest warrant against him.

The Romanian foreign minister asked Péter Szijjártó “to observe the European legislation in this field so that the procedure may be completed.” Hungary refused, and Romanian public opinion is up in arms.

A Romanian politician who is not exactly a friend of Hungarians in the first place wrote an article on his blog in which he expressed his total amazement that Orbán has the temerity, after the Markó affair, to visit Romania this weekend. I

ndeed, Orbán is already in Transylvania. He posted the following picture of himself and his youngest daughter with this caption: “In Transylvania, at home.” I wonder what the Romanian reaction to this purposefully ambiguous caption will be.