10.000 Steps A Day For A More Competitive Hungary 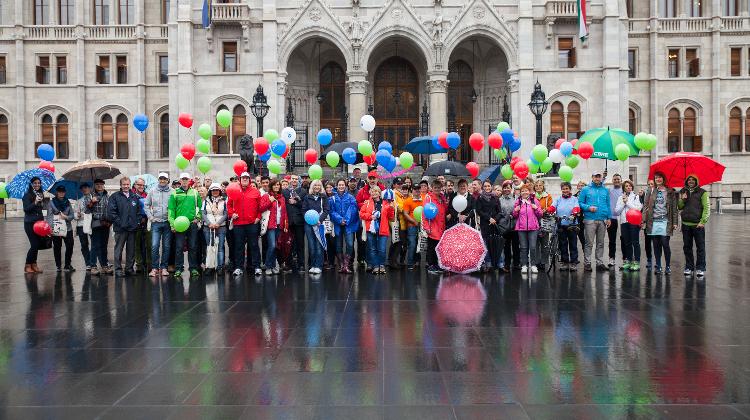 700 employees from 30 international and Hungarian companies joined the 10.000 steps initiative, launched by the American Chamber of Commerce (AmCham) in September 2015. The first milestone of the 100-day program is a half-day walk organized on October 8, where close to a hundred participants walked from the St Stephen’s Basilica to the Margaret Island.

AmCham will continue the initiative also in 2016 with it’s professional partner, the Global Corporate Challenge (GCC).

AmCham Hungary is placing a special focus on healthcare in general, and maintaining a healthy workforce in particular, as part of its new vision and strategy; indeed, we view it as crucial to a competitive Hungary.

"Our aim is to improve 10 places in the World Economic Forum's competitiveness rankings within the next 10 years, with the active involvement of our 360 members”- stated Írisz Lippai-Nagy, CEO of AmCham Hungary. To reach the “10 in 10” target AmCham has marked the main areas for improvement where it can realistically expect to achieve the greatest impact.

“A healthy nation as a goal depends on many factors. We believe that a nation with a healthy workforce can increase its economic resources and effectiveness. To that end the Healthy Nation Policy Task Force – together with the AmCham Board – decided to launch the new program, focusing on the 160,000 colleagues employed by our member companies”- added Diána Stegena, CEO of Amgen Hungary and Chair of the AmCham Healthy Nation Policy Task Force.

The 10.000 Steps Program started this fall in cooperation with the Australia-based Global Corporate Challenge, the world’s biggest and most successful health initiative. The Chamber together with the representative of the organization announced that the Program will be continued the next year, involving even more companies.

Dr. Attila Beneda, Deputy State Secretary of Healthcare, in his supporting letter writes that „the heathcare sector strongly supports all initiatives and cooperations that emphasise the importance and significance of a healthy lifestyle.”

AmCham Hungary as an independent, non-governmental, non-political, financially self-sustaining organization - since its establishment – seeks the improvement of the Hungarian competitiveness. AmCham’s membership profile represents a majority of Hungary’s largest companies: AmCham member companies’ share in Hungary’s export: 35,3% 6 of the 10 largest companies in Hungary are members of AmCham, number of employees at 160 member companies is nearly 160.000. On top of that, the Chamber is a member of the U.S. Chamber of Commerce and also of a large umbrella organization called AmChams in Europe representing companies with close to 4 million employees and 2000 billion € worth of investment, providing members of AmCham Hungary get access a wide European network.

About GCC
The Global Corporate Challenge is a scientifically developed, clinically proven 100-day initiative that takes your employees on a journey that dramatically and permanently improves their relationship with exercise, nutrition and sleep, and instills in them a new sense of self-belief, personal responsibility and resilience. GCC has transformed the cultures of thousands of the world’s leading organizations and changed the lives of more than 1.8 million employees from more than 5,000 companies across 185 countries.