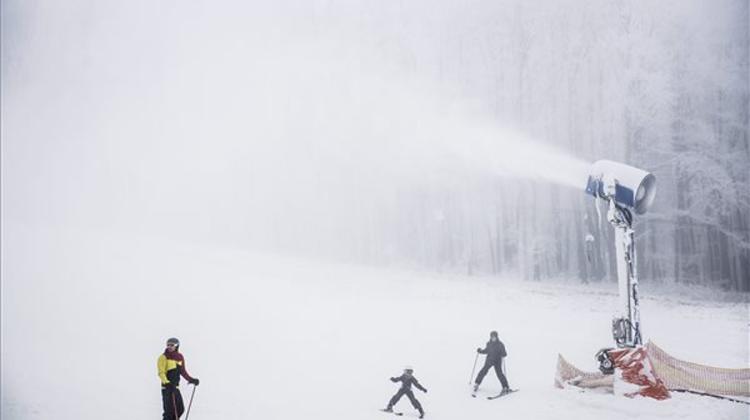 According to hirado.hu, it snows in many areas of the country, so the Visegrad and Epleny ski resorts opened. If the weather remains cold additional ski slopes can operate as well – M1 TV said on Friday. According to M1 TV 1-2 cm of snow has already fallen in Tata, but the weather did not affect the traffic so far. The operator of Nagy Villam ski resort in Visegrad said that the slope yet only works with the snow cannon, but natural snow is also expected on Tuesday and Wednesday.

Gyula Feher, President of the Chernel Istvan Ski and Touristic Association said there are 10 bigger ski resorts in Hungary.

There are snow cannons at 5-6 locations besides Visegrad. These ski resorts cooperated and created the movement called “Enjoy skiing at home!” which tries to advertise the possibility of skiing in Hungary, hirado.hu wrote.

According to the National Meteorological Service (OMSZ) 1 cm snow thickness was measured in Sopron Beregbanya among the settlements above 300 m.

A thin snow layer has been created in Sopron suburbs and on the Kuruc hill among the settlements under 300m. In addition, there is snow at the Per airport, in Sarmellek, Siofok and Szombathely.

Snow is expected in several settlements in the coming days.

In the coldest hours, the temperatures can drop under -15 degrees Celsius.

After two days of using artificial snow the Epleny ski resort opened on Friday – MTI wrote. Marketing manager Balint Ebele said that the whole ski track 1 and the training track can be used.

The four-seat ski lift, the T1 training lift, the equipment rental, the restaurant, the buffet and the catering facility on Amos Hill are also operating, hirado.hu wrote. The ski track is covered by 30-60 cm snow while there are wintry conditions in Bakony. According to Balint Ebele it is planned to open the additional tracks as well.