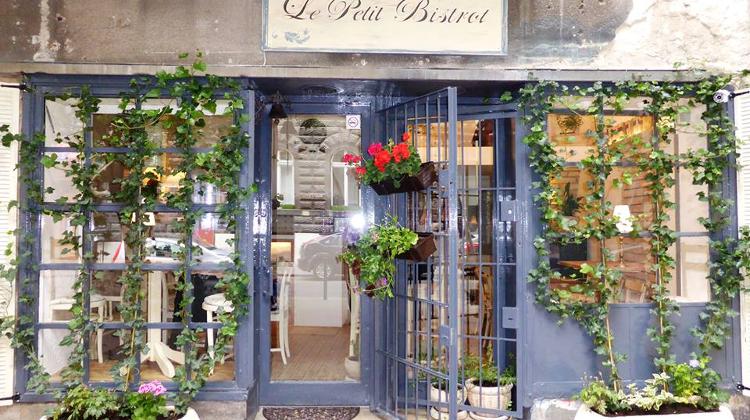 It feels like you are standing in one of the many small bistros and restaurants along the Rue Lepic in the Parisian district 18, Montmartre: waitresses in pink aprons, lace tablecloths and wrought-iron frames for the doors and windows transform the restaurant on the corner of Hajós and Dessewffy streets into a French fairyland. You can unwind here in a really delightful way with a baguette sandwich or a pannacotta.

During their first visit to Paris the operators of the restaurant, Zsófia Horváth and Attila Kabai, had a special experience: the couple discovered the typical French small restaurants where the customers often just drop by for a quick coffee or order a baguette with camembert and cranberries on the go. A street vendor who prepared huge but paper-thin “crêpes” on his cart, but still with the necessary French elegance, made their decision final: they would open a bistro in the heart of Budapest.

Le Petit Bistro opened in 2014 in District VI. However, the couple had to go a long way to get there: the greatest challenge that the restaurateur and the skilled carpenter were facing was finding the right premises for a crêperie.

“Attila was planning on opening a small café of our own for a long time,” Horváth explains. She needed a bit of encouragement herself, since she wanted to operate a restaurant that “has a special atmosphere and, as the Hungarians say, a soul”.

A small shop at a corner near the Opera House had the charm they were seeking. Now the façade entwined by ivy and with an old service table beside the entrance invites passers-by to take a look into the wonderful interior of the bistro, which has been furnished in land house style.

“We bought many of the treasures in the room from the local flea market,” Kabai says, pointing out the interior design with its refurbished wooden furniture, elegant lace tablecloths and rustic brickwork that give the room its French ambience.

An old gnarled tree and a fountain with streams of water sparkling in the sun decorate the terrace of Le Petit Bistrot, which is ornamented with fairy lights, inviting you to relax and breathe during the summer months. It’s easy to present the concept of the restaurant: Budapest citizens should also be able to experience the delights of the excellent French cuisine.

After their trip, the couple became “gradually aware that we had this kind of taste and the hospitality itself in our blood”. In Paris they got the idea for the name of their own bistro. This is not only a nice little place to enjoy a lunch snack, it’s also cosy for afternoons or evenings to be spent enjoying local wines or beer self-brewed by the Bistrot.

“In our hurried world there should be a place where time slows down and our guests can have a couple of hours of peace,” Horváth says.

The menu card at Le Petit Bistrot is not only versatile but it also fits the design and concept of the crêperie, just like the dishes displayed on it. The little hand-bound booklet, which can be closed with a silk ribbon, also contains a guest-book and pictures about the restaurant besides the dishes offered.

Despite the favourable prices the Bistrot offers a fantastic range of dishes: they fuse French specialties with traditional Hungarian dishes. So besides the grilled sandwiches and typical French “baguette” there are hearty hand-made or sweet crêpes on the menu card as well.

The local highlight: as well as the traditional French pancakes they offer Hungarian varieties, such as the “Hortobágyi palacsinta”, which is filled with Hungarian meat stew, pörkölt. “That one is my favourite dish,” Horváth confides.

Regarding desserts Le Petit Bistrot is also giving a top performance: crêpes with ice-cream, fruits or sweet sauces offer a sweet round-off for your meal. The Bistrot is famous for its chocolate cake with forest berries, which is served hot, accompanied by a ball of cardamom ice-cream.

The special offer of the house is the home-made pannacotta, which “is offered with strawberries and pink pepper sauce”. None the less: for the operator of Le Petit Bistrot it’s important that they offer “besides the French pancake specialties also Italian pastry and baked products, delicious products from local wineries and Hungarian family companies”.