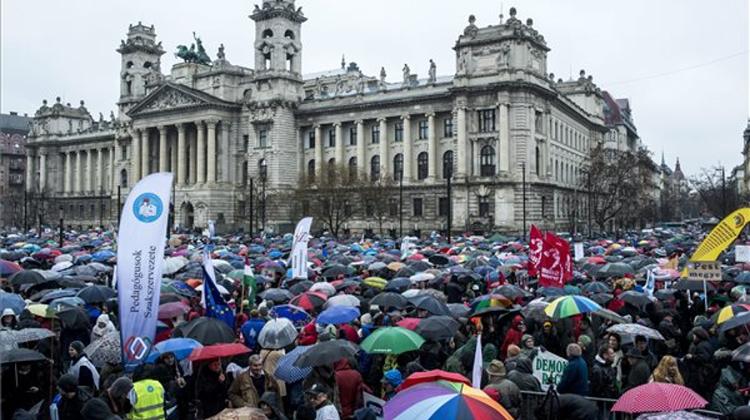 Following Saturday’s mass demonstration, Népszabadság declares what it calls ‘Orbán’s educational counter-revolution’ a failure, while Magyar Nemzet likens the unshaven protestors to the student movement which gave birth to Fidesz 28 years ago.

In Nepszabadság, Miklós Hargitai labels the system of public education which the demonstrators have united against ‘Viktor Orban’s one man educational counter-revolution’ and declares it a failure. The left-liberal daily claims there is no one left around the Prime Minister who ‘would have even the faintest idea’ about education. The author accuses the government of insisting on an old-fashioned educational model comparable to that of the 50s, when schools were expected to educate pupils according to Marxist ideals.

The rally was called by the left-leaning Teachers Trade Union which decided to boycott the roundtable talks initiated by the government to discuss teachers’ grievances. The demonstration was also joined by the other nationwide teachers’ trade union which attended the talks and called them ‘constructive.’

In Magyar Nemzet, Albert Gazda sees the protest movement as wider in scope than just an expression of concerns over education. It has come a long way from the problems listed by the teachers of the high school in Miskolc, but it is very difficult to see what it has got closer to, he suggests. Gazda also seizes on a line from an interview published on the same day, in which István Klinghammer, former undersecretary of higher education in Viktor Orbán’s government, scornfully dismissed the protests.

Mr Klinghammer was upset by the spectacle of what he called ‘unshaven teachers in chequered shirts parading in the streets.’ Magyar Nemzet’s commentator angrily rejects that view, and recalls the unruly protests leading to the change of political system in Hungary in the late 1980s and the role of Fidesz in those events.