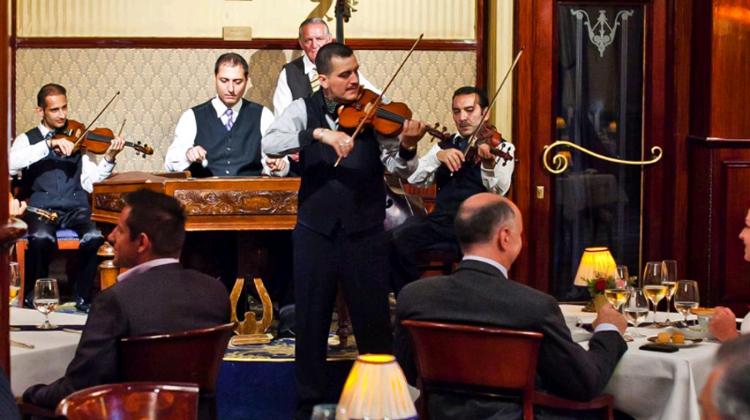 When I made my first fleeting visit to Budapest in 1975, the Gundel Restaurant was a burnt out husk: the grandiose old restaurant which took its name from Károly Gundel in 1910 had been destroyed by fire. The next time was in the late eighties when the restaurant had been rebuilt and redecorated according to the criteria of the Soviet era in fifty shades of brown. Gaggles of waiters loitered in doorways apparently oblivious to the pleading gaze of their guests. Portions overlapped the plates with bosoms of white rice crowned by a cockerel’s curled crest of ridged bacon while the Fogas arrived baked like a boomerang.

Then a miracle happened: in 1992 the restaurant was bought by Ronald Lauder, son of Estee Lauder and later U.S. ambassador to Austria, art collector and future owner of Klimt’s famous painting Adele Bloch together with George Lang.

George Lang was one of the renowned Hungarian restaurateurs who worked their way up to make a name for themselves in New York, he with the Café des Artistes and Paul Kovi with the Four Seasons. He was a renaissance man who played his Stradivarius in the evenings to relax, an urbane host with an almost comical Hungarian accent oozing the proverbial Hungarian charm.

With the help of people like Adam Tihany and Milton Glaser the partners restored Gundel to its former glory, recreating the high ceilings and lighting of the restaurant’s heyday and lining the walls with Hungarian art of the period. Gundel again became the finest restaurant in Hungary at a time when the country was reawakening to luxury once more.

When you wanted to impress a guest or a client from abroad you took him to Gundel where dishes arrived under cloches dramatically raised aloft by solicitous waiters while Gyuri Lakatos, the primás from the famous family of gypsy musicians plaintively played his favourite songs in his ear. In summer we sat outside in the lovely garden, the sounds of bellowing elephants wafting over from the zoo next door.

Then Gundel was sold to a hotel chain and in the meantime Budapest was booming with Italian, fusion, theme and trendy restaurants opening every day and Gundel went into a slow decline. But some come, some go and Gundel goes on forever.

I went back recently to one of their excellent Sunday brunches and while I wish there were more Hungarian guests instead of people stepping off luxury cruise ships, the old magic is still at work, the food is still good, the gypsy violins still tug at one’s heartstrings. This is still the most impressive restaurant in Budapest, a place where guests can discover the Hungary that used to be and hopefully, in this at least, will never change.

During this time she wrote for many important American publications including the Travel Section of the New York Times, Travel + Leisure and Gourmet Magazine. She currently divides her time between Budapest and Tuscany. Peter and Anne have two children and were married for forty years.