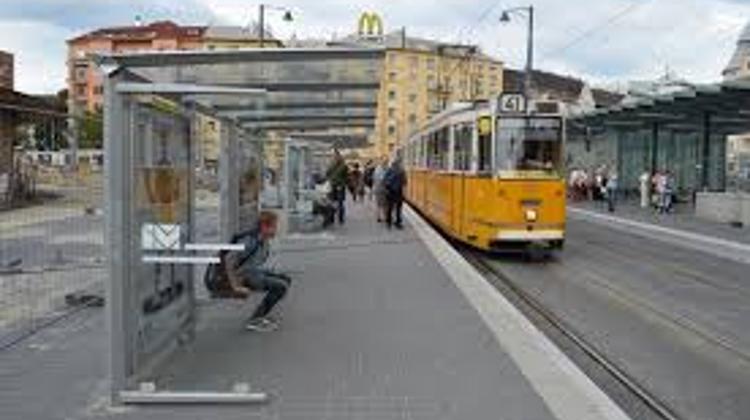 During this period, Szabadság Bridge will be fully closed to trams and car traffic as well since the deteriorated tram tracks on Bartók Béla út between Móricz Zsigmond körtér and Szent Gellért tér will be refurbished. At the same time, a total of 35 tram stop platforms will be made accessible on Fehérvári út and Bartók Béla út.

Trams will be out of service on these route sections to be replaced by mostly low-floor, air-conditioned buses crossing Erzsébet Bridge instead of Szabadság Bridge. BKK recommends metro line M4 which will operate more frequently. For those coming from South Buda, Fővám tér and Kálvin tér are best reached by metro M4 while replacement bus services are the best choice for those headed to Astoria or Deák Ferenc tér.

Road traffic restrictions will also be in place at Szent Gellért tér, on Bartók Béla út, Móricz Zsigmond körtér as well as on Fehérvári út. BKK does its best to cause as little inconvenience to passengers as possible and provides information about the changes on all concerned services, information boards will be placed at the relevant stops with travel options and 30 thousand flyers will be handed out on site in the first few days of the changes.

BKK staff will also assist customers on the spot at major transport hubs.

Tram services on the affected lines

Tram line 17 operates between Bécsi út/Vörösvári út and Móricz Zsigmond körtér while tram lines 19 and 41 run only between Bécsi út/Vörösvári út and Rudas Gyógyfürdő. Trams 47 and 49 are replaced by buses on the full length of the lines. Trams 56 and 56A run between Hűvösvölgytől and Rudas Gyógyfürdőig while tram 61 operates between Hűvösvölgy and the Móricz Zsigmond körtér terminus located in Villányi út. In other words, all tram lines operating in Buda will be affected with the exception of lines 59 and 59A.

Passengers wishing to go to areas in South Buda not served by trams need to use the following replacement services:

Regular as well as replacement bus lines will be diverted to Szerémi út due to the closure of Fehérvári út in the vicinity of Mezőkövesd út as construction will be carried out in front of Budafok kocsiszín (tram depot). Due to platform construction works, the section of Fehérvári út between Vegyész utca and Építész utca will be open only to traffic going to the city centre.

To Bartók Béla út and Fehérvári út, please board the replacement buses running via Erzsébet híd in Kossuth Lajos utca ahead of the intersection with Semmelweis utca
To reach Kálvin tér and Fővám tér by bus 48, please board at the tram stop to Kálvin tér
The Astoria M stop of buses serving Rákóczi út will be relocated in both directions so as not to hinder the turning of replacement buses. To Keleti pályaudvar, please board buses on Rákóczi út, ahead of the intersection with Puskin utca. The stop to Buda will be relocated ca. 25 metres further back.

About the current refurbishment works of tram stops

During the summer and autumn of 2016, a total of 55 tram stops in South Buda will be refurbished in Alkotás utca, Bartók Béla út, Fehérvári út and Villányi út to provide barrier-free accessibility. The refurbishment of the new CAF trams’ vehicle maintenance depot in Budafok is already underway and it is expected to finish by April 2017 in connection with the procurement of the CAF trams. The new stop platforms – adjusted to the height of the new trams’ floor and to their vehicle length – will be 26 cm high and 36 metres long. Parallel to the refurbishment of stops, the following supplementary works will be carried out:

In the vicinity of certain platforms, the green area will be increased and new platform equipment, such as rain shelters, benches, dustbins, etc. will be installed.

On certain sections of the affected tram lines synchronised, with the construction of the platforms, track- and overhead-cable maintenance and ground cable works will be carried out to increase tram service safety.

In the vicinity of the Albertfalva bypass tracks, the unused terminus will be dismantled, the tracks will be reconstructed and a new bypass section will be constructed. To provide more convenient access to tram stops, designated pedestrian crossings will be reconstructed at several locations. A new pedestrian crossing will be established at Déli pályaudvar railway station to provide accessibility.

Fehérvári út between Lecke utca and Csurgói út will be refurbished.

Due to the development, on the southern section of the interconnected tram network in Buda, the platforms of all the tram stops on Fehérvári út and Bartók Béla út will be reconstructed, and the deteriorated tram line section on Bartók Béla út between Móricz Zsigmond körtér and Szent Gellért tér will be refurbished. In connection with the refurbishment of the Budafok tram depot, track construction will be carried out as well. In the autumn, a further 20 tram stops will be modernised in South Buda making them barrier-free.