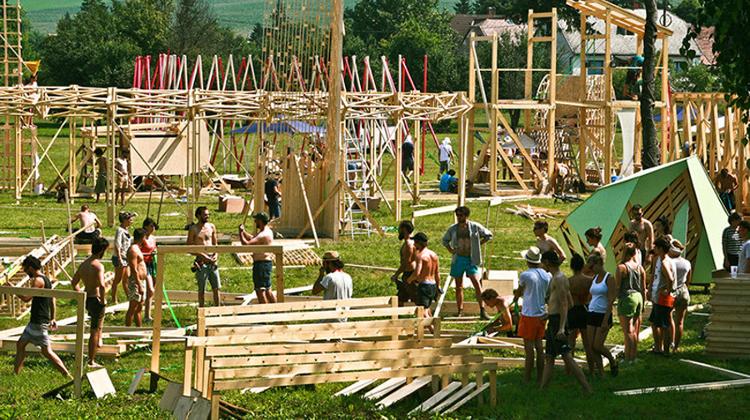 In the Old Testament God gave a very precise manual on how to build a tabernacle, the portable dwelling space of divine presence, a meeting point between God and his people. It symbolised the cosmology of its community as well as marking the new station in their wandering.

Project Village 2016 is asking its community to define and construct their own place of ritual for its nomadic members. A place of arrival, permanence, connection… followed by disintegration and final disappearance.
The fanfare of Project Village 2015 came to be a portable settlement celebrating its provisional state as it joined various festivals. Wherever it travelled, it became a catalyst for interaction, activity and pleasure of its temporary communities.

This year we will test the process of settling

Project Village explores the reciprocal relationship between communities and their built environment using the rural terrain as its canvas.

Continuing our investigations in the countryside, Project Village 2016 calls you to join our glomad community, to migrate and claim our territory of Csoromfolde, and transform its surface of trees, grass, ruins, and left behind artefacts into our rural settlement.

A settlement to be constructed on the border of a sedentary and a nomadic state, a place for the cyclical revival of Hello Wood’s rural campus. A settlement that will become the temporary home of its builders.

What would you build first to mark your base by your neighbour’s side?

Can this first station become the foundation in the making of our village? How will the site alter our preconceived, visionary or revolutionary ideas of a community settlement? And vice versa: how will our ideas revive the remaining walls of the previous hamlet?

How will we write the new chapter in the story of Csoromfolde where we are the protagonists?

Can a week-long exercise in real-time master planning, practicing the craft and politics of building, partying and constructing our own community lead to a new form of village?

We invite professionals, academics and students from around the globe to shape the horizon of Csoromfolde and lay down the foundation of our rural campus, constructing the threshold between permanent and temporary, ephemeral and grounded, familiar and foreign, a place for discussion  and physical realisation.

Join us in our continuing debate on the future of the countryside while realising our collective fantasy of a village designed, built, and inhabited by its architects.