Events On 23 October Are About Heroism, Tribute & Freedom 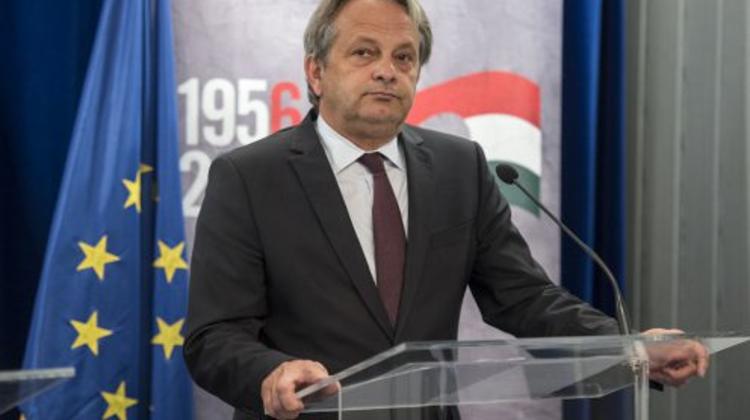 At a press conference, MoD Parliamentary State Secretary Tamás Vargha stated that heroism, tribute and freedom will be the central ideas of the commemoration organized for the 60th anniversary of the 1956 Revolution and Freedom Fight.

The state secretary remarked that the struggles of the Hungarian nation were not over at the end of the Second World War, as “one occupation was followed by another”. October 1956 called for heroism and self-sacrifice. He added that those average young people who went to the streets in 1956 wrote history and sacrificed their lives without hesitation for Hungary’s freedom and independence.

In 1956, the Hungarians stood up for the nation, independence and freedom with “an elementary force”, the state secretary said. Speaking of the central programs, he emphasized that on Sunday, 23 October, the National Day of Hungarian Freedom, all Hungarians are expected to gather at 15:00 in the afternoon outside the House of Parliament in Kossuth Square, where speeches will be delivered by Prime Minister of Hungary Viktor Orbán and President of the Republic of Poland Andrzej Duda.

In answer to a question, Tamás Vargha said that the most important thing is to guarantee the safety of participants, foreign guests and celebrators. The terror threat of the country has not changed, so the level of security measures for 23 October will be similar to that of the 20 August celebrations.

MoD Program Manager László Szabó told the press that the programs will be coordinated by the 1956 Memorial Committee. As usual, the Operations Unit will be responsible for the security of the events, in cooperation with representatives of the police, the disaster management, the ambulance service, the meteorological service and the Centre for Budapest Transport (BKK).

The central events already start on Saturday, 22 October. On that day, from 10:00 to 18:00, visitors can see the Holy Crown inside the House of Parliament. In the afternoon, former Prime Minister Péter Boross, President of the Public Foundation for Freedom Fighters delivers a speech at the 1956 memorial of the Budapest University of Technology (BME). At 15:00 in the afternoon, the traditional commemoration ceremony “The people made history” begins at BME, with speakers including Mária Schmidt, Government Commissioner in charge of the 1956 Memorial Year.

Following the BME commemoration ceremony, a torchlight procession sets off from BME to Józef Bem’s statue. At 17:30, the Flame of Revolution rises in Nagy Imre Square, where Mayor of Budapest István Tarlós delivers a speech. At 18:00 in the evening, a wreath-laying ceremony takes place at the Bem statue, where President of the Rákóczi Association József Halzl gives a speech.

On Sunday, 23 October the central programs start in Kossuth Square, where, in the presence of President of Hungary János Áder, the flag of Hungary is raised with military honors at 09:00 in the morning. At 15:00, a ceremony entitled “For a Free Hungary” starts in Kossuth Square, after which, at 19:00 in the evening, the Freedom Concert begins in the László Papp Budapest Sports Arena.

László Szabó also noted that on 4 November there will be a period tram service on the tramlines 4 and 6, and newsboys will hand out 1956 news digests at the stops of trams 6 and 49.

Due to the weekend events, tram 2 will be running on a shortened route. On Saturday evening at 10:00, Vértanúk tere will be closed down, just like the lower quay on the Pest side on Sunday.

A detailed description of the central events organized for the 60th anniversary of the Revolution can be found on the website oktober23.kormany.hu.

The new, democratically elected National Assembly declared 23 October an official national holiday in 1991, which was later confirmed by the Fundamental Law of Hungary in 2012.