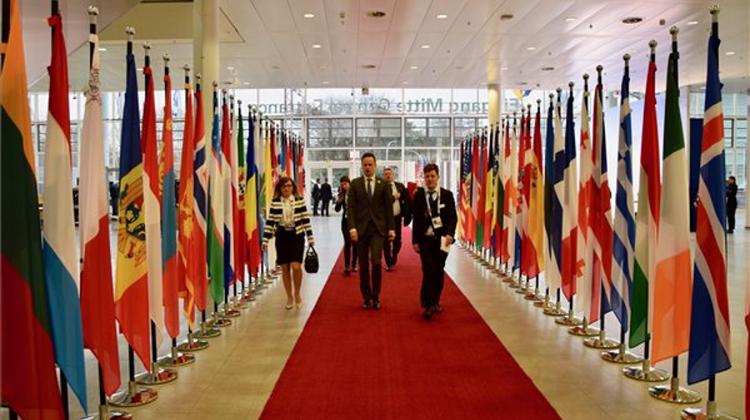 Hungary and Germany agree that restoring the European Union’s competitiveness is of key importance, and this can only be achieved if all member states go back to respecting budgetary discipline, Foreign Minister Péter Szijjártó told German conservative daily Die Welt in an interview published on Wednesday.

Hungary and Germany are in constant communication on EU matters, the minister told the paper. And although Germany’s position provides “somewhat of a compass” for Hungary in foreign policy matters, Hungary and Germany differ on the issue of illegal migration, he said.

Szijjártó said respecting fiscal discipline meant that member states “cannot speculate on other countries’ money” and that they must do everything they can to meet the challenges of the “digital and revolutionarily new economic era”. Hungary and Germany are in full agreement on these crucial matters, he added.

The minister called Germany Hungary’s number one economic and political ally. He noted that there are 6,000 German companies doing business and employing 300,000 people in Hungary.

About 27% of Hungary’s foreign trade turnover is with Germany, Szijjártó said, adding that Hungary is the “most important hinterland” for the German car industry.

Commenting on the suggestion that both countries are also in support of setting up a joint European army, Szijjártó said Hungary was convinced that the European arm of NATO had to be reinforced and that it was wrong to rely solely on the United States to uphold Europe’s security.

Asked if a joint European army would be established with the aim of countering Russia, Szijjártó said it was vital for Europe and Russia to normalise their relations.

The minister said cooperation between the EU and Russia on the basis of mutual respect and respect for international law served Hungary’s economic and security interests. He said it was impossible for the continent to regain its competitiveness without cooperation between its western and eastern parts.

Asked if Hungary and Germany had moved closer on Europe’s migrant crisis, Szijjártó stressed that Hungary’s position on the issue had been unchanged for two years. “We believe that illegal migration is harmful and a threat to Europe,” he said. He said the EU’s mandatory migrant quota scheme should be scrapped, as it is “a severe violation of European rules”.

Asked if the intensifying cooperation among the Visegrad Four (V4) countries was aimed at countering Germany’s influence on the EU, Szijjártó said the V4 alliance was not directed against any state. He said the V4 grouping of the Czech Republic, Hungary, Poland and Slovakia was in full agreement on major issues.

Although there are differing views on ties with Russia, this does not endanger cooperation in other areas, he added. Asked about the possible expansion of the V4 to include Austria, Szijjártó said the alliance would remain as the V4, adding, at the same time, that the group was prepared to work together with other countries in the region as part of the “V4 plus” scheme.

Asked to comment on Prime Minister Viktor Orbán’s early endorsement of Donald Trump in the run-up to the US presidential election, Szijjártó said this was simply about “expressing our opinion”.

He said the Hungarian government saw Trump’s foreign and immigration policy plan as being more favourable to Europe than those of the Democratic Party. When asked how Trump’s presidency could benefit Hungary or central and eastern Europe, Szijjártó said “the Trump administration will be better for the whole world.”

US foreign policy has so far been centred on “the export of democracy”, which has caused a lot of damage, for example in Europe’s southern and south-eastern neighbouring regions, Szijjártó insisted. “We believe in rationality even in foreign policy, so now we have good reason to be optimistic,” he added.