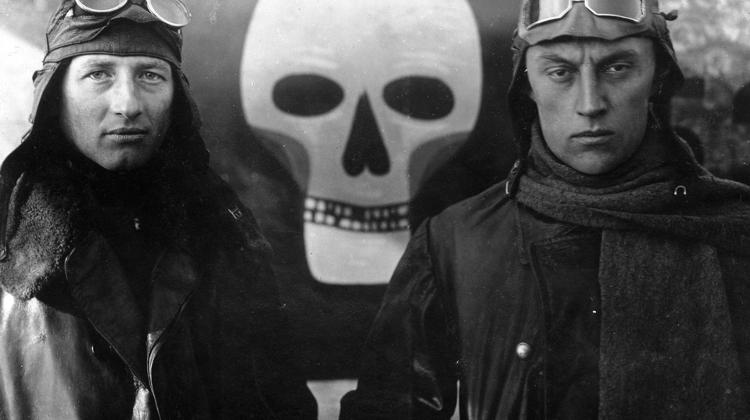 Closes 14 May. Over the last four decades, Sándor Kardos cinematographer’s amateur and private photo collection has become the home of almost one and a half million photo-objects: a unique combination of photographs, negatives, glass plates, and various technical images.

The 'Horus Archives'’s name comes from the hieroglyphic for one of the most important Egyptian god, Horus’s eye, representing fullness, completeness. The characters of the eye signify a move towards the other end of the infinite, towards the ever smaller limitlessly. The archive itself is also infinitely expandable; it is like a jigsaw world game in which every piece is a world on its own.

This is “the collection of randomly brilliant images” where “God extended his finger” into the process of picture-taking and use (quotes by Sándor Kardos).

These amateur, family and private photos of no artistic intention are the images of visual freedom. Due to either real or technology-induced chance, the constellations captured rewrite the rules of composition as well as the familiar spectacles.

The absurdity of images lies in that they will not show what the picture-taker then and there saw but what they did not. Or what they actually did not want to capture but, due to the lack of their technical knowledge and thanks to the muses wandering around, the images became something else by growing beyond the intention and turning, thus, into a work of art. Said muses not only entered into the process of photographing, but they also had an impact on developing, enlarging and the ‘life events of the finished photo.

While there are others who collect amateur, private and family photos, here the works are not collected by theme, author, or function; the collection focuses on a particular movement that essentially affects the creation of the image. It is, therefore, unique. It has been growing according to an open system of selection with Sándor Kardos being in the center of the process. It is being built around his person, his way of dealing with the issue of seeing and perceiving in existence, as well as the way he approaches photography as the special image creating method.
The photograph’s function of fulfilling desires takes place at the same time the picture is taken; moreover, its birth is, in a way, a result of this desire as well. The need for realistic documentation has brought this chemical art to life, perpetuating photography’s unique relationship with reality to this day. This relationship-quality is the basis for considering the image-creating process as ‘magical realism.’

Besides the typical Horus images, the exhibit also focuses on photographs which are visual realizations of wishful interventions from before Photoshop existed. These modifications are apparent: simple cuts, cutting pieces off, complete shadings, retouching with a solution of potassium ferricyanide, scraping from negatives. These all become part of the image without disintegrating along with the disappearance of the gestures. These actions of modifying the image carry magical connotations: the aim is to symbolically destroy the person portrayed as if bringing about a change in the reality of the picture could affect the reality of life as well as a kind of ‘magical transmission.’

In addition to the unknown photographers, we also present a selection from Sándor Kardos’s father, Gyula Kardos’s images of “family unification” from the 1950s-1960s. Members of a family who, for reasons of different time and space coordinate, could not be together now could meet in these pictures and become subjects of a family portrait generated by the combination of other photos – as the illusion of reality changed by the image.

The name Horus Archive is of symbolic importance. In Egyptian hieroglyphs, the full image of the Horus-eye stands for number 1, while the details of the eye-symbol refer to the fractions leading towards the infinite smallest denominator. Therein, the smallest parts are the images of amateurs, while the totality of the images is the one unified whole, something divine, signifying the unique interpretation of the images. It means that I consider collecting to be at the same level as the independent creative activity of taking photographs. The so-called great photographers notice and document correlations in life that those living it do not perceive; i.e., they chose their themes from life. There are millions and millions of photographs taken by amateurs wherein the phenomenon of creating a masterpiece may occur, even without the photographer or the subjects of the photo realizing it. And, as far as the selection is concerned, it is irrelevant whether the underlying content is created before or after the exposure, or even if it appears decades later.