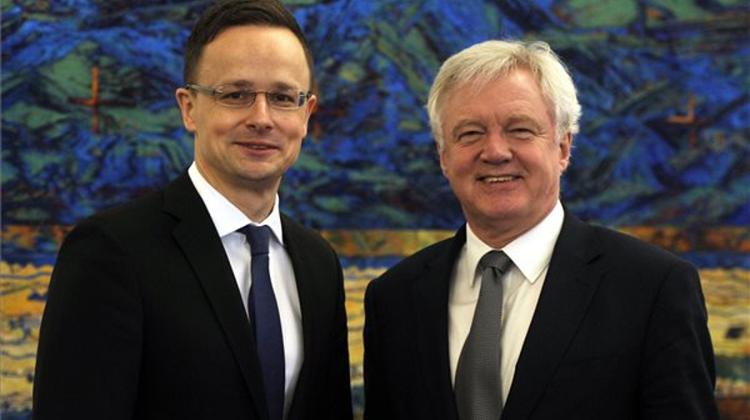 The EU should negotiate “the broadest possible” free trade agreement with the United Kingdom, while the UK should stay a part of Europe’s security and defence systems, Foreign Minister Péter Szijjártó said after meeting David Davis, UK secretary of state for exiting the European Union, in Budapest. Szijjártó also called for a “fair” Brexit agreement, one which enforces both European and British interests.

Concerning the UK’s contributions to the common European budget, he said that a relevant agreement should ensure “a balance of rights and obligations after Brexit”.

“We respect the British decision to quit, but we regret it; it is a great loss for Europe,” Szijjártó told a joint press conference. He added that Brexit could have the biggest impact on central and eastern Europe, saying that without the UK’s payments to the European budget in 2019-2020, Hungary could lose up to 1.5 billion euros.

Szijjártó also urged that the rights of Hungarians working in Great Britain should be protected. “We cannot make concessions on that,” he said, adding however chances of an agreement were very good. He said that officially 55,000 Hungarians live or work in the UK, though some estimates put that number at 200,000.

Hungarians working in the UK contribute an annual 6,300 euros each to the Hungarian budget, he added. Davis arrived in Hungary at Szijjártó’s invitation, as part of a tour of the EU.

His talks are aimed at “avoiding a Brexit without an agreement or one with a bad agreement”, Szijjártó said at his press conference.