New Chapter Of Quality Opens In Hungarian IT And Telecommunications Sector 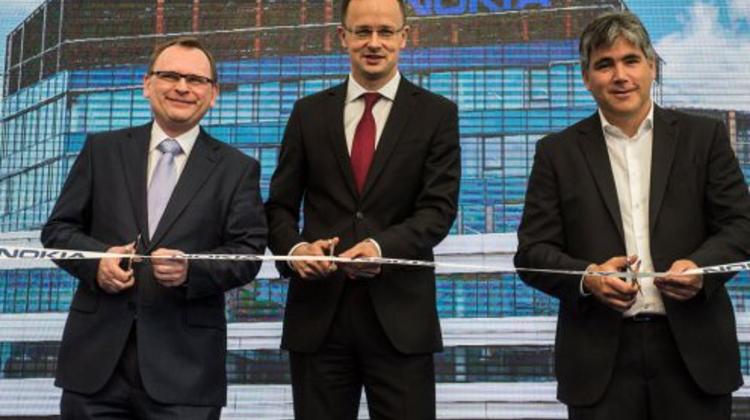 “The opening of the Nokia Skypark office building represents the opening of a new chapter of quality within the Hungarian information technology and telecommunications industry; the 25 thousand square metre building is the newest and one of the most modern office and research & development locations within the sector”, Minister of Foreign Affairs and Trade Péter Szijjártó said at the official opening of Nokia Solutions and Network Ltd’s new building in Budapest’s 13th District in the Corvin Quarter.

According to a statement by project developer Futureal, the project was realised at a cost of over 20 billion forints (EUR 64M).

Mr. Szijjártó noted that Nokia regards Hungary as a priority location within its global development strategy, and plans to further expand its Hungarian relations.

The Minister highlighted that Hungarian IT professionals and engineers, who are working on development projects that are significant even in international comparison, are being provided with the best possible conditions to enable them to achieve further important results within these world-class projects.

Mr. Szijjártó told the press that Hungary would like to provide the most favourable possible conditions for enterprises that are looking for locations for investments aimed at developing new technologies and based on research & development. “The Government has created the favourable tax, vocational training and digital conditions required to enable this”, he said.

“Last year, the Hungarian information technology sector generated a total production value of 3 trillion 101 billion forints (EUR 9.95bn), an increase of 4 percent compared to the previous year, with 201 thousand people working within the sector at the end of 2016, a year-on-year increase of 14 percent”, the Minister explained, adding that “Nokia is without a doubt one of the flagships of this industry in Hungary”.

Managing Director of Nokia Solutions and Network Ltd Béla Zagyva stressed that Hungarian professionals are working on several projects that will be determining the direction of technological development for at least the next ten years, citing as an example the fact that one of the Hungarian products used most often throughout the world, a mobile connection server that connects over 1.4 billion people, was also developed here in Hungary.

Mr. Zagyva also told Hungarian news agency MTI that Nokia had signed a ten-year lease agreement with the Futureal Group with regard to the building, with an option to extend the leasing period.

The Managing Director told the press that the company employs some 2100 people in Hungary and some two thousand people are working in the new building, with moving completed in late January. “Nokia has been present in Hungary for almost 20 years, and the Budapest office is one of the Nokia organisation’s most significant research & development centres”, he added.

Mr. Zagyva also stressed that research & development extends beyond the company itself and Nokia is an active participant in university research programmes and provides students with the opportunity to test themselves in real industrial development projects.

Owner of Futureal Gábor Futó praised the new building, explaining that it enables the establishment of an inspirational environment where developers and programmers feel good.