Hungary Wants EU To Reimburse Half Of Border Control Costs 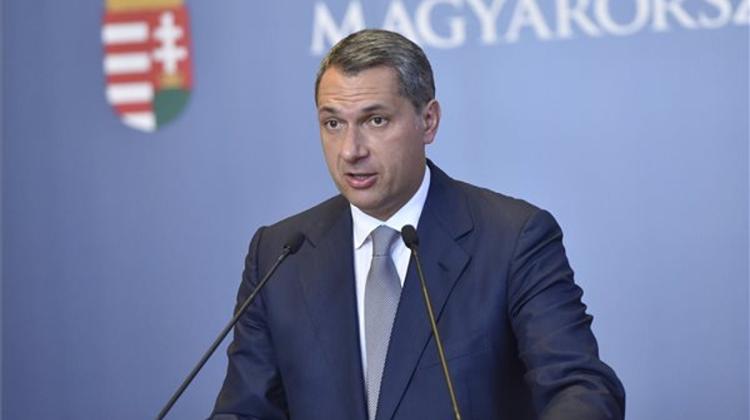 Prime Minister Viktor Orbán has asked the European Commission to reimburse Hungary for half its spending on border protection, the government office chief said on Thursday. János Lázár said at a regular press briefing that the total cost since the start of the migrant crisis amounted to 800 million euros.

Lázár said the issue of border protection should be discussed “in the name of European solidarity” and “solidarity must be demonstrated in practice”, so the EU should bear a part of Hungary’s costs.

By building a border fence and training “border-hunter” units, Hungary has been protecting the whole Schengen area, not only Hungarian citizens, Lázár said. Hungarian police and soldiers are instrumental in ensuring the safety of all European citizens, he added. Lázár noted that several countries have already received help from the European Commission.

Greece has already received half of the 1 billion euros promised, he said, while Italy is to receive 656 million, and Bulgaria 100 million euros. It is time Hungary also made a request, Lázár said. Plans to build migrant camps in Libya accord with the Hungarian government’s stance aimed at halting illegal migration outside the European Union, Lázár said.

Lázár noted that for the past two years the government had proposed creating hotspots outside the bloc. Migrants staying at the facilities would be made to follow necessary procedures, he said, adding that the government supported endeavours to return migrants to their homelands and eliminate the causes of migration. The government has prolonged the state of emergency introduced in connection with the migration crisis until March 7, Lázár said. The state of emergency would have ended on Sept. 7, he noted. In the first eight months of the year, 773 migrants entered Hungary illegally, Lázár said.

Without Hungary’s fence along its southern borders “the numbers would be comparable to two years ago,” he added. On the subject of EU action taken against Poland, Lázár said that the European Commission and Germany had “launched a campaign” against Poland and were applying “double standards”. Hungary supports the Polish people and their government, he said.

Regarding the lawsuit Hungary and Slovakia has brought against the European Commission on the resettlement quota scheme of asylum seekers, Lázár noted the European Court of Justice is to reach a decision next week.

“If the Hungarian government does not come to an agreement with the European Commission or has its doubts”, they will not hesitate to return to court, he said. The procedure so far only aimed to establish whether the quota scheme was in accordance with European legislation, he said.

In a weekly government press briefing on Thursday, Lázár informed the press: they are contributing to the developments of the municipalities of 152 small localities, inter alia, for the refurbishment of roads, pavements, kindergartens and playgrounds.

They will also extend the deadline for the completion of the manuals regarding the townscapes of localities: municipalities will have until 31 December instead of 31 October. He listed among the Government’s decisions that they will facilitate the importation of textbooks for the National Serb Self-Government, a new watering system will be installed on an area of 27 thousand hectares in the Mezőhegyes Stud Farm, and four medical universities will be given excess grants.

The Cabinet further decided that the Seuso treasures will be displayed at exhibitions to be held in Kaposvár, Kecskemét, Miskolc, Nyíregyháza, Székesfehérvár and Zalaegerszeg, and HUF 300 million will be allocated for the organisation of the exhibitions. Mr Lázár offered his condolences at the press conference Governmentinfo to the relatives of the Kossuth Prize winning film director Károly Makk who passed away on Wednesday.

His death is an enormous loss to Hungarian culture, he said. In answer to the enquiry that, according to press reports, certain senior managerial jobs in state administration could only be awarded to persons with political science degrees obtained from the Public Service University as of 2023, the Minister said: there is no final decision yet, but according to the Government a system should be created where, in the case of certain jobs, a university degree in political science should be a condition of hiring, while in other cases, it would be an advantage.

Mr Lázár was asked about the fact that a former government office manager said: in his view, government offices in the countryside have been filled with people associated with Fidesz. „That is nonsense”, Mr Lázár commented on the claim, refuting that anything like this could have emerged in the context of 35 thousand people. Those who work in the district or government offices today must work extremely work, he highlighted.

He said: „I have sent 3,500 people away from this system, and have terminated 2,000 managerial positions. There is no place, air or money for anyone here to hang around and loaf about, or to find their advancement by sucking up to others.” In the context of another question concerning the reduction of bureaucracy, he agreed that Hungary will need a smaller state sector and fewer workers employed from public funds in the next few years.

He was also asked about the diplomatic negotiations regarding the CEU. He said: they are making slow progress, there is no result as yet. In answer to a question concerning the words of András Veres, President of the Hungarian Catholic Bishops’ Conference condemning the artificial insemination programme, he said: the bishop represented the position of the church, and he has no right or possibility to comment on the conviction of the church.

„We are, however, employees of the State, and the goal of the Hungarian Government is to achieve that as many babies are born as possible”, he stated, highlighting: the artificial insemination programme has brought the blessing of a baby for many infertile families.

The media outlets for which György Soros provides financial assistance do have the capacity to shape opinions, he said, and added in answer to a further question: the conservative political family needs allies in the media, and „the businesspeople who invested in this (…) also did so in order to help, and this is only right”.

In answer to another journalist’s question, he said: they are ready to recommend to UNESCO that the cemetery at Fiumei út and the attached Salgótarján út Jewish cemetery should be declared a part of world heritage. Lázár was further asked about the fact that, according to press reports, waste containing asbestos was left on the demolition site of the entertainment complex Petőfi Csarnok.

He said in reply: he instructed the metropolitan government office to investigate these reports. The government is allocating 5 billion forints (EUR 16.3m) for renewing the ambulance fleet and plans to buy 100 ambulances each year, Lázár said. He also said that like other EU member states, Hungary will allow new types of drug testing in the country.

In connection with the start of the school year, Lázár said schooling costs for families had significantly dropped this year. Free text books will be provided to more than one million pupils from grade one to nine, he said, adding that more than half of students would get free school meals. Lázár also noted that the wages of teachers would be increased by 3.5 percent on average in September.

Asked to comment on recent remarks by Andras Veres, the president of the Hungarian Catholic Bishops’ Conference, strongly condemning in vitro fertilisation — calling the scheme “poison” and participation in it “a sin” — Lázár said that the bishop stated the position of the church on behalf of which “I do not have the right to speak”.

“We, however, are employees of the Hungarian state, the aim of which is to make sure that more and more children are born in the country,” Lázár said. He noted that the IVF programme supported by the government had already helped many infertile couples to have a child.