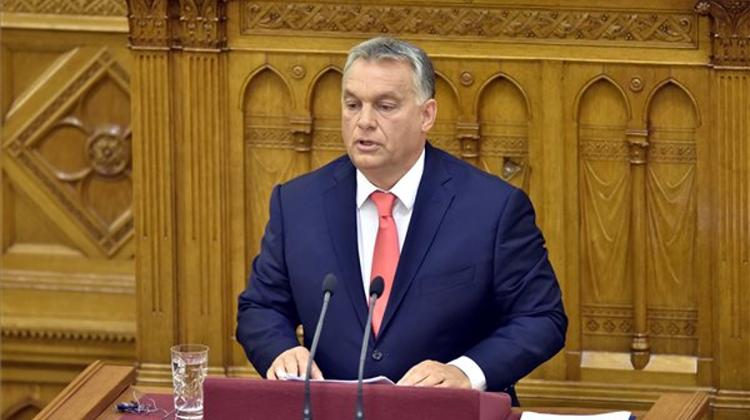 “Hungary will never be an immigrant country,” Prime Minister Viktor Orbán said in his address to lawmakers on the first day of parliament’s autumn session, distinguishing between “immigrant” and “non-immigrant countries” in terms of their approach to migration.

He said the distinction between the two types of countries lay in the fact that certain countries accept, approve of and “at times organise” migration while countries like Hungary are determined to preserve their security, way of life and national, religious and cultural identity. “We want a Hungarian Hungary and a European Europe,” the prime minister said.

Today, pro-immigration countries wish to settle the difference between the two sides by recommending “that we too become immigrant countries, and if we refuse, they force it on us”, he said. This is the essence of the mandatory resettlement quota scheme, Orbán insisted.

The prime minister said he considered this to be the plan of US financier George Soros, arguing that it was Soros who had first proposed the idea, “publishing it under his own name”.

“This is what is being implemented by the Brussels bureaucrats who incidentally are eating out of Soros’s hand,” the prime minister said, adding that the European Commission has tabled a proposal to implement a permanent migrant relocation mechanism. Orbán urged those who value Hungary’s independence, security, national culture and Christian roots to participate in the government’s “national consultation” survey on the “Soros plan”.

He said the government had continued its struggle against Brussels’ mandatory migrant resettlement scheme over the summer. Orbán said the mass migration wave facing Europe was a result of global shifts reshaping the world which he said coincided with “Islam’s most recent global offensive”.

But the EU is following a flawed migrant and foreign policy, he said. It is “clinging to its erroneous ways”, turning Europe into a continent that opens up its external borders rather than protects them, Orbán said, adding that this was putting temptation in the way of migrants.

“Everything we have seen up until now was only the warm up,” the prime minister said, citing a recent NATO estimate according to which 60 million migrants could flee Africa between now and 2020, most of them for Europe.