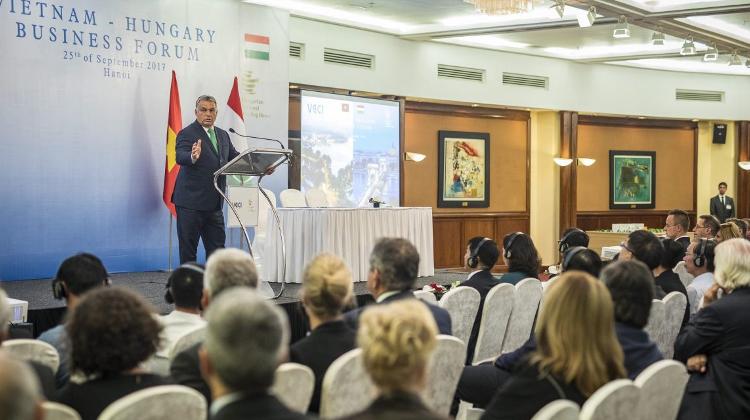 According to Prime Minister Viktor Orbán, the West must accept the new global situation according to which “it will not be blowing the trade winds in the upcoming decades”. In his speech at a Vietnamese-Hungarian business forum on Monday,

In his speech at a Vietnamese-Hungarian business forum on Monday, Mr. Orbán, who is currently on an official visit to Hanoi, said that in the upcoming decades the tendency according to which the focus of the global economy is moving from the West in an easterly direction will gain strength, and the West must also accede to this new global situation, which is not an easy process, however. “Central Europe is making good progress with relation to adapting, however, and the countries of Central Europe have developed broader relations with the eastern part of the world than many large and determinative European countries”, he explained.

Accordingly, Mr. Orbán recommended that if Vietnamese companies would like to establish a bridgehead in a dynamically developing region, then it would be worthwhile for them to choose one of the Central European states, such as Hungary, which is “emerging and gaining strength”.

However, the Prime Minister also drew attention to the fact that the volume of Hungarian-Vietnamese trade and investment relations is currently modest. “But despite this, a large Hungarian political and business delegation has nevertheless come to Hanoi, the reason for which is that Hungary has designated Vietnam as a possible strategic partner in the Southeast Asian region”, he said.

The Prime Minister mentioned the health industry, IT, transport management, the establishment of a population registration system, the water industry and agriculture (and especially food safety), as areas recommended for economic cooperation. With relation to the latter, Mr. Orbán indicated that the cultivation of genetically modified organisms (GMOs) is banned in Hungary, and the Government plans for Hug nay to be the first country in the world in which it is impossible to even distribute such products. “But we still have a lot to do to achieve this”, the Prime Minister noted.

At the forum, which was organised by the Hungarian National Trading House Cls. (MNKH) on the Hungarian side, Vietnamese Deputy Prime Minister Vũ Đức Đam pointed out that his country not only represents a market of 90 million people, but is also a bridge towards the countries of the Association of Southeast Asian Nations (ASEAN).

In the name of his Government, the Deputy Prime Minister promised that they would do everything possible to assure the best possible conditions for the trade and investment activities of Hungarian enterprises in Vietnam. As the forum, before the politicians present, the MNKH, the Hungarian Association of Agricultural Informatics (HAAI) and the Technological Association of Ho-Chi-Minh City concluded a cooperation agreement on, amongst others, the export of agricultural informatics solutions and the realisation of joint projects in Vietnam.