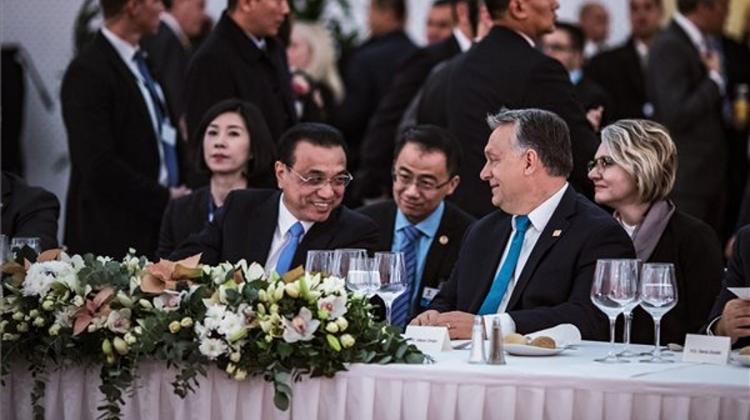 China’s strengthening economy offers a fount of opportunities to countries in central and eastern Europe, Prime Minister Viktor Orbán said after a forum attended by leaders of China and the CEE region in Budapest.

At a press conference, Orbán noted Asia’s increased weight “in the new world order which is now forming”, adding that China had become “a dominant financial and technological power”.

He said central and eastern Europe harboured great potential but technology and financing from outside Europe was required to meet future development needs since the continent’s resources were no longer sufficient. Orbán called China- CEE cooperation a success story.

At present 11 EU member states and five non-EU countries are involved in the 16+1 cooperation with China. One key question is whether they are able to launch ambitious, large-scale development projects that enhance the region as a whole, he added.

China’s Prime Minister Li Keqiang said China would like to see a prosperous Europe, and the country supports both European integration and the development of countries aspiring for EU membership.

Li Keqiang said central and eastern Europe was the EU’s most rapidly developing region, with an average GDP growth rate of 3% per annum.

Cooperation with China, whose economy grew by 6.9% in the first three quarters of 2017, could enhance this trend, he said. China seeks to import as many goods and services from the CEE region as possible and to promote the development of its infrastructure, the prime minister said.

He noted that trade between China and the CEE had increased by 14% this year. In the years to come, China seeks to open its gates even wider to the world, including central and Eastern Europe, he said. In a move to reduce its trade surplus, it would like to increase its farm purchases from this region, he said.

Li Keqiang said China was prepared to expand industrial capacities and establish industrial parks in the CEE region. He added that his country has offered 5,000 state scholarships to central and eastern European students.

At the summit’s opening ceremony, Li Keqiang noted that in recent years economic cooperation between China and the CEE region has gradually been increasing, reducing the distance between Europe and Asia. China and central and Eastern Europe complement and boost each other’s economy, and may find new paths to success on the international market together, Li said.

Chinese imports may also open up opportunities for local businesses, he added. Tourism is on the rise between the countries, Li said, with a growing number of Chinese tourists visiting central and Eastern Europe every year.

Boyko Borisov, prime minister of Bulgaria, the host of the next China-CEE summit, noted that his country would hold the EU’s rotating presidency in the first half of 2018.

The summit will focus on the situation and development of the Western Balkans. It is also from this aspect that Bulgaria sees huge potential in China-CEE cooperation, he said.