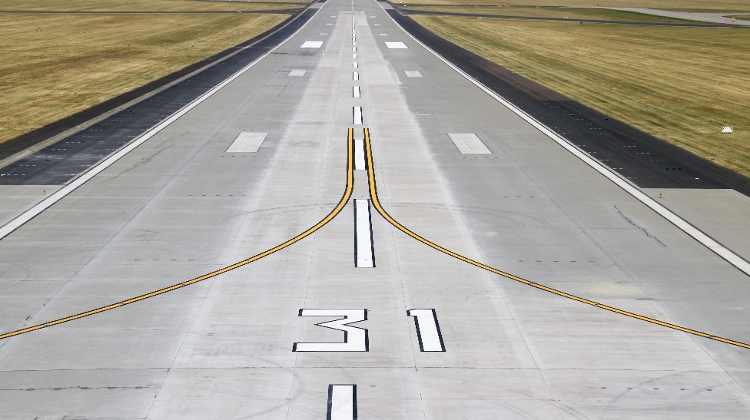 Budapest Airport is to refurbish the second section of Runway 1 of Liszt Ferenc International Airport between 12 March and 30 June this year.

The project includes the concrete pavement and most of the ground lighting system: cables, electric manholes, and lights will also be replaced.

In addition, landing direction 31L will receive a state-of-the-art instrument landing system. During the 5.1 million euros (1.5-billion-HUF) refurbishment project, the airport will use its other runway.

Between 12 of March and 30 June, Liszt Ferenc International Airport will be operating with a single runway while Budapest Airport continues the reconstruction of Runway 1.

The concrete pavement was replaced last year on a 900-meter section of the so-called touchdown zone, and works will affect the next 1400-meter section in the middle of the runway this year; in this area, based on deep structural examination it is not worth to fix the surface with simple routine repairs any longer. On the section refurbished last year the defects were rectified.

The concrete surface of the next 1400-meter section of the runway has to be replaced for a similar reason, as it has been receiving loading of aircraft landing and taking off for more than three decades now.

This time, 33 thousand square meters of concrete surface will be refurbished (the size of four and a half football fields). In addition to replacement of the concrete pavement, several other important developments will be completed on the runway, including the upgrading of ground lighting systems.

160 lamps and close to 90 ground lighting manholes will be replaced and reconstructed in line with the latest European standards, and the cables of the primary electric loop supplying runway lights will also be replaced (300 kilometers of cables combined).

In the last phase of the works, the instrument landing system will be upgraded on the South- Eastern landing direction of the runway (direction 31L).

Similarly to the previous system, the new ILS will be helping pilots to approach and land on the runway safely in low-visibility conditions, but it is also capable of significantly more precise operation than the previous system.

The works are necessary for maintaining safe operation of the airport, since the purpose of the runway is to safely serve aircraft landing and taking off in a variety of circumstances.

Stephan Schattney, chief technical officer of Budapest Airport said that the quality of the surface of the runway as well as the related complex infrastructure demanded by contemporary aviation require continuous maintenance and renewal.

At the same time, Budapest Airport carefully prepared for the project in order to ensure that the available period of 3 and a half months is sufficient to complete it.

Stephan Schattney pointed out, “350 people as well as 250 vehicles and machines will be working on site to ensure that the airport can be operated with two runways again from the beginning of the peak summer season in July.”

The price tag of the project is EUR 5.2 million (over 1.6 billion HUF), fully financed by Budapest Airport from its own resources. The project is part of BUD 2020, the 50-billion-HUF (160-million- EUR) five-year airport development program of Budapest Airport, to be financed and completed by the airport operator from its own resources until the end of 2020.

As part of the program, the new 10 000-m2 pier under construction at Terminal 2B is scheduled for completion by mid-2018, the new logistic bases of DHL Express and TNT as well as the airport hotel have been completed already, and construction of the new logistics center called Cargo City is to commence this year too.