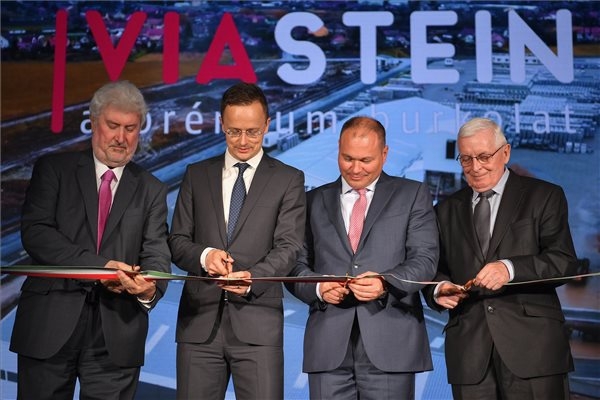 Hungary is Europe’s most competitive investment zone, the Minister of Foreign Affairs and Trade stated in Biharkeresztes at the ceremony of Viastein Kft. where the company’s paving stone manufacturing plant was inaugurated and the foundation stone of a new paving stone finishing hall was laid down.

Viastein Kft. is building the new facility from an investment of HUF 8.9 billion which will create 180 new jobs.

The Hungarian government is providing a non-repayable grant of HUF 2.18 billion for the purposes of the project.

Péter Szijjártó stressed it is important from the viewpoint of investments that Hungary is Europe’s safest country, and additionally this is where the – single-digit – corporation tax is the lowest in the European Union.

He added that in the past eight years 750,000 new jobs had been created, and therefore anyone who wants to work has the possibility to do so. He said the Hungarian economy has entered a new dimension in recent years, and the country is near to full employment.

In 2010 unemployment stood at 12 per cent which has fallen to 3.8 per cent nationally, but in the Bihar region, too, it is now below 5 per cent.

The economy is growing at the rate of 4 per cent, and they would like to maintain this growth rate also in the coming years.

New jobs and predictable earnings help to keep in Hungary everyone who would leave the country in order to find a job, he said.

In addition to large multinational companies, businesses in Hungarian ownership are also beginning to come of age, and they are now able to stand their ground on international markets as well, he added.

István Vitányi (Fidesz-KDNP), Member of Parliament for the constituency highlighted in his inauguration speech that during the EU fiscal cycle between 2014-2020 they are using 60 per cent of the grants coming from the European Union for the development of the economy.

In the Bihar region they are spending one and a half billion forints on the development of industrial parks, including the one in Biharkeresztes which will be given HUF 400 million. Attila Balázs, Managing Director of Viastein Kft. said the production of paving stones which began last summer in test mode is unique in Europe as they are using the latest cutting-edge technology.

After the paving stone finishing plant to be built in the second phase of the development, they will commission a division manufacturing prefabricated building blocks in the third phase to be completed by 2020.

The total investment will amount to HUF 13.5 billion and will create 240 jobs.