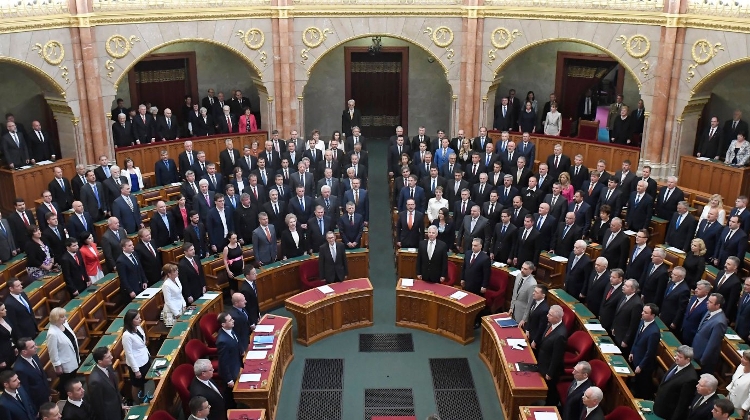 The legitimacy of the new national assembly and the incoming government is beyond dispute, President Janos Ader said opening the inaugural session of parliament on Tuesday.

On April 8, having seen the high turnout in the election before learning the results, the leaders of the parties that will now be in opposition had expressed the same view, Ader said.

The president said the decision made by voters in the election must be respected by everyone, arguing that this was the fundamental rule of democracy.

To draw the conclusions of the election, Ader suggested that the National Election Committee and the parliamentary committee in charge should review the election procedure and, if need be, propose changes to the electoral law.

This raises the question whether Hungary should return to previous regulations “to avoid some people turning this celebration of democracy into a business”. The president thanked organisers and voters for their engagement.

Ader proposed that parliament should re-elect Viktor Orban, leader of the Fidesz party, as prime minister.

On the topic of the European Union, the president said certain EU leaders “seem to have lost their way”.

“Public life in the European Union is characterised by the lack of a clear vision for the future, politicians getting lost in petty disputes, intellectual idleness and cliches repeated ad nauseam,” Ader said.

He said the question today was whether Hungary will be on the winning or losing side of this competition. Today, more than 15 percent of Hungary’s workforce works in the digital economy, he noted.

Another important question for the coming years will be “whether we will be able to increase our level of prosperity without having to take the resources we use from our grandchildren while also repaying to nature the debt we’ve accumulated over the past decades”, Ader said.

Laszlo Kover was elected the speaker of Hungary’s parliament. He was re-elected in a secret ballot with 143 votes in support, 35 against and one abstention. After the announcement of the results, Kover took his oath of office.

In his inauguration address, Kover promised predictability for the upcoming parliamentary cycle.

“I am and will remain predictable in my conviction that Hungary’s sole path to prosperity lies in parliamentary democracy based on the sovereign will of the people and that the only legitimate source of political power in our country is the community of the Hungarian voters,” Kover said.

Just as in the previous structure, parliament will have 15 permanent committees, with 10 to be chaired by Fidesz lawmakers and 5 by opposition MPs.

The new parliament’s committees and committee officials were approved unanimously with 183 votes.