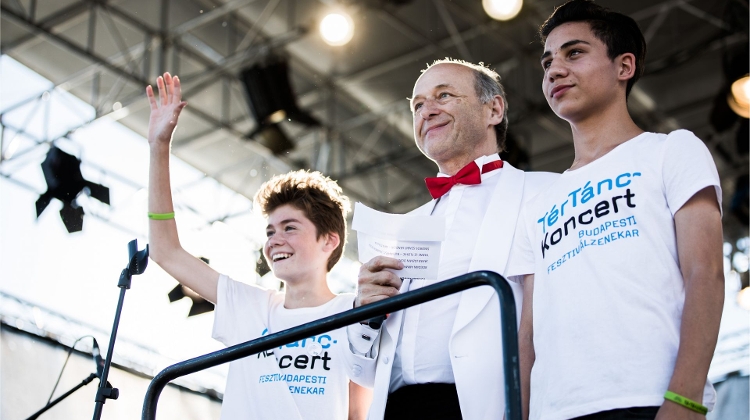 June sees the return of the 'Dancing in the Square' project with conductor Iván Fischer and the Budapest Festival Orchestra.

Together with gipsy musicians for tolerance

Brahms’ Hungarian Dances, the Budapest Festival Orchestra, gipsy musicians and 500 dancing children in one concert. Iván Fischer and his orchestra are welcoming the summer at a new venue this year - on the square in front of the St. Stephen’s Basilica at 7 pm on 17 June. Dancing on the Square returns again to promote tolerance! Admission is free of charge.

Budapest Festival Orchestra is organising its grand, open-air Dancing on the Square project for the fourth time since its launch, featuring (in addition to several surprise pieces) Brahm’s Hungarian Dances, conducted by Iván Fischer on the square in front of St. Stephen’s Basilica.

The concert is dedicated in memoriam to Kossuth Prize winner  cimbalom player Oszkár Ökrös, principal cimbalom and soloist for the Budapest Gypsy Symphony Orchestra, who passed away in January.

Soloists will include violinists József Csócsi Lendvai and József Lendvay, as well as cimbalom players Jenő Lisztes, Károly Vadász and Mihály Farkas. The audience can enjoy the Festival Orchestra’s traditionally open-air concert sitting on paper chairs, which can be taken home afterwards.

It is possible to create together!

500 children, disadvantaged and more privileged, Roma and non-Roma, will be dancing together to Brahms’ Hungarian Dances and Harangozó Prize winner Bertalan Vári’s choreography. Each child has their own story – heart-breaking or merry, cruel or inspiring, these stories all share one thing: they show something that we adults could learn from.

However different we may be, it is possible to create together something truly valuable and uplifting. The youngsters are coming from Borsod, Hajdú-Bihar, Szabolcs-Szatmár-Bereg, Nógrád, Jász-Nagykun-Szolnok, Baranya, Csongrád and Pest counties.

This year, the core values of the project (acceptance; dialogue; joint creation; mutual responsibility; respect and tolerance) are being championed by six ambassadors. These are: Dóri Behumi and the Budapest Bár, Kriszta Bódis, head of the Van Helyed (You belong!) Foundation; János Lackfi, the József Attila and Prima Primissima Prize-winning author and poet; Péter Halácsy, co-founder of Prezi; Sándor Zwack, chairman of Zwack Unicum Nyrt.; and cellist Antónia Bodó, who’ll be representing the orchestra. In the words of Roma poet, Károly Bari, “Our traditions preserve us”.

“Indeed, the Dancing on the Square project has become a tradition that preserves us regardless of ethnicity, skin colour or social status. It preserves us through the joy of patience and acceptance”, adds Kriszta Bódis.

Make a move for the children!

Iván Fischer and the Budapest Festival Orchestra launched the Dancing on the Square project in 2015. We would like to continue to provide equal opportunities to hundreds of children to perform alongside one of the world’s leading orchestras. Step for their steps!

Support the little dancers of the Dancing on the Square project here – every small donation matters.

See you on the square in front of the  St. Stephen’s Basilica at 7 pm on 17 June!

You can join the event on Facebook as well!

The key sponsor of the concert is BNP Paribas.