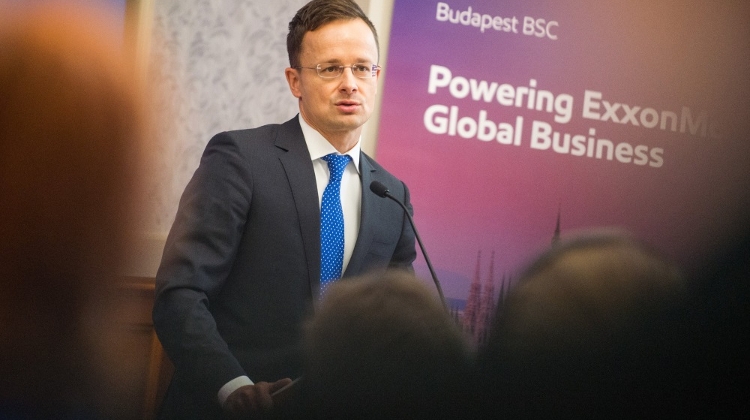 The strategic partnership agreement between the Hungarian government and ExxonMobil was signed by Szijjártó and Romke Noordhuis, director of ExxonMobil’s Budapest office.

Following the signing ceremony, Szijjártó highlighted that ExxonMobil will play an important role in shaping Hungary’s future not only because it will help highly-trained Hungarian workers make a living in their country, but also as its gas industry activities will reinforce the security of the country’s energy supply, said a statement published on official government website kormany.hu.

The company has acquired the rights to a significant Black Sea gas field, which will partly be available to Hungary also, from 2022, providing that Romania fulfills its duties regarding the project, Szijjártó added.

The minister recalled that the Romanian party has undertaken to establish an interconnector with an annual capacity of 4.4 billion cubic meters for the shipment of natural gas from beneath the Black Sea. The capacities have been acquired by two Hungarian companies until 2037.

Hungary’s annual gas consumption is almost 10 billion cubic meters. The greater part of this quantity, some 85%, is purchased from abroad, therefore the gas imported from Romania could cover half of Hungary’s natural gas requirements, the minister added.

Szijjártó stressed that ExxonMobil’s Hungarian support center, which employs over 1,600 people, is performing increasingly complicated tasks that represent a growing level of added value; the center provides IT, controlling, accounting and tax-related services for ExxonMobil’s African, Middle Eastern and European subsidiaries, he noted.

Noordhuis was cited as saying by kormany.hu that, as head of ExxonMobil’s Business Support Center in Budapest, he expects the company’s Hungarian activities to expand further in the upcoming years, adding that Hungarian professionals are skilled, cooperative and identify with the company’s values.

He stressed Budapest’s importance within the company’s global network, adding that the newly concluded strategic agreement reinforces ExxonMobil’s commitment to Hungary, and that the company will continue to participate in training programs and maintain its cooperation with Hungarian universities.