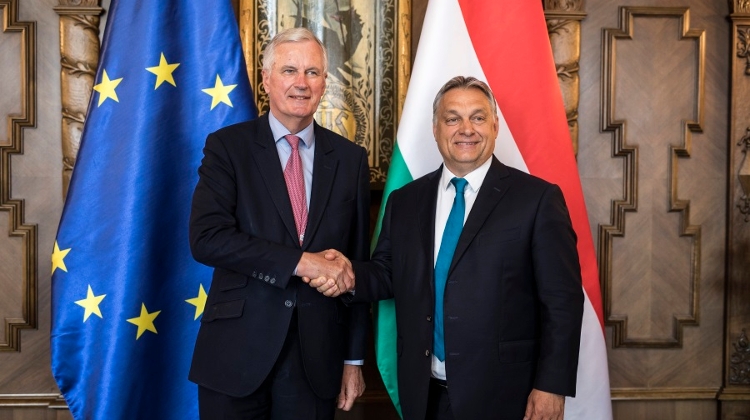 Orbán and Barnier concluded that the EU has managed to preserve its unity during the divorce talks with Britain. The prime minister assured Barnier that Hungary -- along with the other central European countries – would continue to support and assist with the preservation of the bloc’s unity.

Meeting members of parliament’s foreign affairs and European affairs committees, Barnier said the European Union must respect Britain’s desire for autonomy, but the UK must also respect the unity of the bloc.

Barnier said Britain and the EU still had many questions to settle in the divorce talks, the most important being the issues of the common market, the EU budget, EU citizens living in the UK and British citizens living in other EU countries.

The EU does not intend to take “revenge” on Britain when it comes to the EU budget, he said, adding, at the same time, that the country would have to be held accountable when it leaves the bloc. Barnier said that following Britain’s departure, EU-UK relations could rest on four pillars: trade, internal and external security and special agreements.

As regards a potential trade deal, he said the EU could consider an agreement similar to the ones it has with Canada and China. He emphasised the importance of keeping the divorce talks transparent so that all EU countries have a clear understanding of the situation, noting that they will all have to ratify Britain’s exit.

Zsolt Németh, the (Fidesz) head of the foreign affairs committee, underlined the need for a “fair Brexit” and expressed his confidence in Barnier’s ability to strike such a deal.

He said it was vital that Hungarians living in Britain do not become casualties of Brexit and are not forced to return to Hungary. Nemeth assured Barnier of Hungary and the Visegrad Group’s support in the Brexit negotiations.