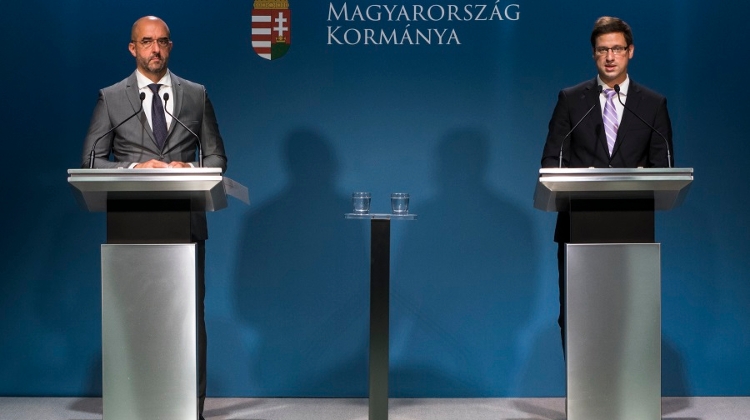 The European Union’s draft budget for the 2021-2027 period is “unacceptable” because it transfers resources from poorer states to richer ones, the head of the Prime Minister’s Office said.

Hungary’s future lies in European cooperation, Gergely Gulyás told a weekly press briefing. But the government can only accept a budget that does not punish countries with substantial economic growth under their belts.

The current draft budget would hurt central European and Baltic states the most while rewarding countries with higher living standards, based on past glories, that have neglected economic discipline in recent years.

Brexit means a smaller budget, he noted, adding that Hungary wants a fair budget that makes up for lost resources.

“We won’t accept funding being diverted to migrants at the expense of member states.” The budget must support common border protection, he said, underlining Hungary insistence that the EU should recompense it for the country’s spending on border protection.

Cutting red tape in Brussels would be the best way of making savings, he said, adding that this had been the European Commission’s position in the past. Gulyás also took issue with the proposal to create separate development funds, one for euro-zone members and another for countries operating their own currencies.

He also slammed the proposal that EU member state should keep only 10% of customs revenues instead of the current 20%. Gulyás noted Hungary’s insistence that the commission had overstepped its authority and trespassed into political territory: its role should be restricted to safeguarding EU treaties.

The draft budget is an example of how the commission is exceeding its remit, he said, adding that the draft budget was political proposal that failed to represent the interests of the European community as a whole. It should not be tied to “constitutional criteria”, he said.

Gulyás also insisted the European Anti-Fraud Office (OLAF) was being used as a tool of political blackmail. Some 52% of OLAF procedures punish countries against joining the European chief prosecutor’s office, he added.

Asked about the possibility that the EU will withhold 150 billion forints (EUR 466m) in funding from Hungary over irregularities detected in bids for EU projects, Gulyás said the conditions for unbiased investigations by OLAF were not guaranteed in Hungary’s case.

He added, at the same time, that he believed all suspected cases of abuse should be investigated. He said that whereas Hungary’s government is open to reaching a fast agreement on the budget, it believes that a good compromise should involve sacrifices by all. He added that the cabinet plans to hold monthly meetings on EU affairs from now on

On the topic of the 2019 draft budget submitted to parliament on Wednesday, Gulyás said the bill had been designed to guarantee Hungary’s security, maintain economic growth, support families and pave the way for full employment.

He voiced optimism about Hungary’s growth prospects, saying that it had been 15 years since they were as good as they are now. Gulyás said reaching full employment was a realistic possibility, given the current 3.8% unemployment rate.

Economists generally regard an unemployment rate of 3% as “practically full employment”, he said, adding that the government considers even a 2.5% rate to be achievable. Gulyás highlighted the Modern Villages and Modern Cities programmes as priority projects, noting that next year’s budget bill earmarks 150 billion forints for the latter.

The development of Budapest and its agglomeration and the coordination of transport is also of key importance, he said.

On another subject, Gulyás said the government will enter into negotiations with Hungarian-born American art collector Imre Pákh about purchasing Mihály Munkácsy’s painting Golgotha. He said he believed an offer of 3 billion forints for the painting was “a good starting point”.

Meanwhile, he said Prime Minister Viktor Orbán has attended every FIFA World Cup final since 1998 and that if he attended this year’s as well, it would be hard to imagine him not sitting down with Russian President Vladimir Putin.

On the subject of the Red Bull Air Race -- a spectacle of aerobatics held over the River Danube next to the national Parliament -- government spokesman Zoltán Kovács said this year’s event was expected to generate 5 billion forints in tax revenue, significantly more than government spending on organising the race.

The tourism sector overall is expected to generate 20 billion forints in revenue from the event, he added.

Earlier this week, green opposition LMP accused the Budapest city council of putting the interests of multinationals over those of residents by supporting the staging of the race, arguing that the race produces noise levels above what is legally acceptable and breaks the city’s environmental protection regulations.