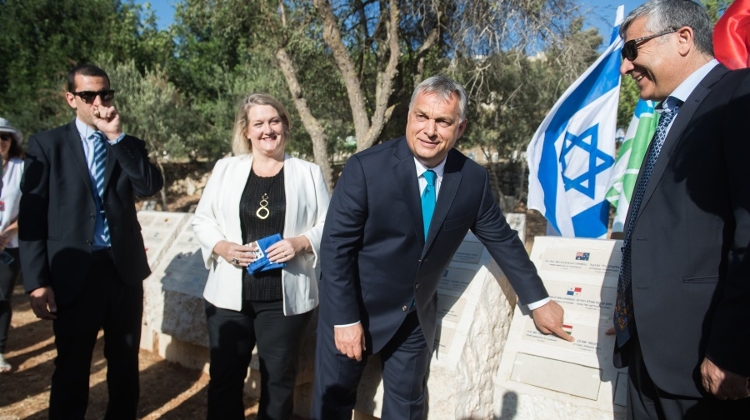 Prime Minister Viktor Orbán said during his visit to Jerusalem that economic cooperation between Israel and Hungary was “strong”, noting that there are 200 Israeli companies present in Hungary, mainly in the tech industry, employing some 5,000 people.

“We’re not asking for money, just goodwill and support.” Orbán noted that Netanyahu had paid a visit to Budapest last summer, and underscored the importance of his reciprocation of that visit coincides with the 70th anniversary of Israel’s founding.

He also noted that Hungary and Israel will be celebrating the 30th anniversary of the re-establishment of diplomatic ties next year. Later, at a tree-planting ceremony, Orbán said that ties between Hungary and Israel would further strengthen in the future.

As part of his official visit, Orbán planted a tree in the Grove of Nations. In his address, he said that the friendship between the two countries was based on Hungary’s Jewish community, which is central Europe’s largest, as well as the large number of diaspora Hungarians in Israel.

It is also based on the legacy of Theodor Herzl, the sharing of similar values and a common desire to preserve peace and security, he added. The prime minister said that every political leader was dutybound to learn from the wrongs of the past.

“We will never forget that the Hungarian government, at that time, could not defend its Jewish citizens, but today the safety of all Jewish citizens in Hungary is guaranteed and anti-Semitism meets with zero tolerance,” he said.