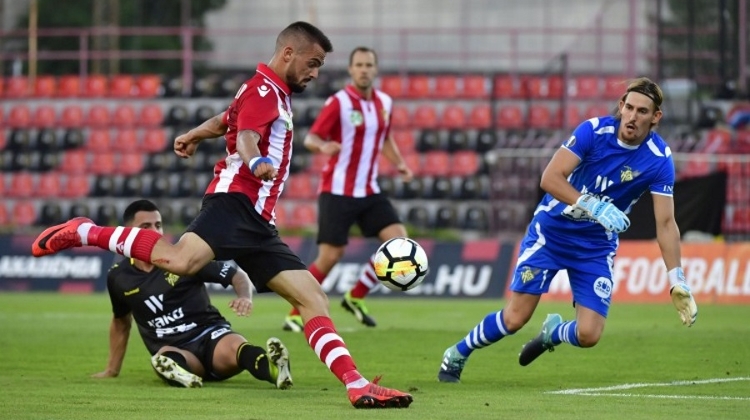 It was a mixed set of first-leg results for Hungarian clubs in European competition this week, Honvéd winning 1-0 at home against Niederkorn of Luxembourg in the Europa League, ten-man Újpest crashing to a 4-0 defeat away at illustrious Sevilla in the same competition and MOL Vidi FC holding out for a goalless draw away at Ludgorets of Bulgaria in their Champions League qualifier.

Budapest Honvéd had reached the UEFA Europa League 2nd qualifying round stage courtesy of a 4-0 home win and a 5-3 aggregate victory over Rabotnicki of Macedonia and it was one of last week's heroes, Filip Holender who had the first clear chances of the match in the 25th minute, but instead shooting first-time from Kisztián Vadócz's sweet through-ball he took an extra touch which allowed goalkeeper Flauss to block his shot, the former Hungary under-21 international forward then volleying the rebound into the side-netting by the right post with only a covering defender protecting the Niederkorn goal.

Vadócz then headed Heffler's ball into the box over the bar from eleven metres out and Batik half-volleyed another Heffler cross straight at Flauss from around the penalty spot as Honvéd turned the screw, without the desired success though.

The Budapest club's last chance of the half came with Dániel Gazdag's 22-metre drive but luckily for the Luxembourg team, the ball deflected directly into Flauss' arms.

Little changed in the second half, Supka's men dominating possession but unable to find the goal their control perhaps deserved. Again it wasn't until halfway through the half that the first clear opportunity presented itself but when it did via Heffler's long, deep free-kick from the left channel, Djordje Kamber could only volley the ball high over the bar eight metres from goal at the back post.

As is usually the case in these situations, the home team lives to regret such missed opportunities and Honvéd were served warning that they could still conceded when Olivier Thill sweetly volleyed the ball onto the crossbar from a central position 20 metres out.

The hosts weren't fazed by that though and instead heeded the warning, opening the scoring themselves in the 82nd minute when substitute Botond Baráth stabbed home Heffler's left-wing corner from close range to send the 2,000+ home fans into raptures.

A win was, of course, the minimum target but a greater margin of victory could have been secured had Batik and Vadócz not missed good, late chances, the former with a header over from a narrow angle and the latter with a skied half-volley at the far post after a deep free-kick from the left had evaded everyone else in the box.

Honvéd thus take a slender one-goal advantage to Luxembourg for the second leg next Thursday.

Elsewhere, Videoton recovered from the loss to injury of Anel Hadzic in the warm-up to produce a stoic defensive display and emerge from their Champions League 2nd qualifying round first leg away against Ludgorets of Bulgaria with a battling goalless draw, having repelled 16 shots and fired only two of their own.

The second leg will take place in Felcsút at 20:00 next Wednesday evening with the winners of the tie due to face CFR Cluj or Malmo in the 3rd qualifying round and the losers faced with the prospect of dropping into the Europa League where they would face the winners of HSK Zrinjski Mostar and Valletta FC.

In the third European match involving a Hungarian club, Újpest were always going to have a tough task away against the mighty Sevilla of Spain, but their Europa League 2nd qualifying round 1st leg took a dramatic turn for the worse when Pauljevic was dismissed for a foul in the penalty area which also incurred the punishment of a spotkick for the hosts.

Already a goal down by this point on the half-hour, Újpest were hurt further by Ben Yedder's successful conversion of the penalty and went on to concede two more goals despite a spirited effort while a man down. The 4-0 defeat leaves little hope of progression but Nebojša Vignjević's team will hope to add some respectability to the aggregate result in the 2nd leg at their Megyeri út stadium next Thursday evening.