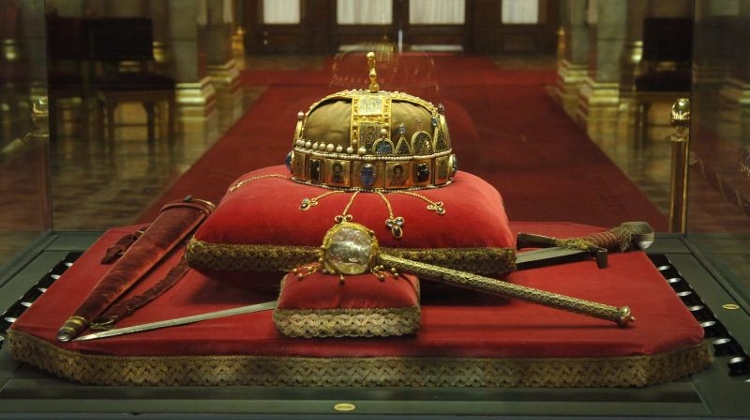 The Holy Crown of Hungary, also known as the Crown of Saint Stephen (Szent Korona), was the coronation crown used by the Kingdom of Hungary for most of its existence. Since 2000, this Holy Crown has been on display for visitors to see in the central Domed Hall of the Hungarian Parliament.

Due to national holiday, on 20th August 2018 there will be an open day in the House of Parliament. Visitors will have the chance to get a glimpse of the Grand Hall, the Dome Hall and the Holy Crown from 12 a.m. to 7 p.m.

Preliminary registration is not required, the admission is free for all visitors. The approach direction to the Building is from Alkotmány Street. A security check is required prior to entering the House of Parliament. Visitors must not enter the building with large bags, packages or objects capable of causing personal injury, such as pocket knives, knives, gas spray etc.

Along of expected great attendance, long queueing up is probable.

During the open day – from 12 a.m. to 6 p.m. – regular visits led by trained guide are also available. These groups depart from the Visitor Centre.

"One thousand years of Hungarian legislation" permanent exhibition in the Visitor Centre can be visited from 12 a.m. to 5 p.m. The Lapidarium and the In memoriam 1956 October 25. - memorial and exhibition on the Kossuth Square is open from 12 a.m. to 6 p.m.

More About the Holy Crown

The Crown was bound to the Lands of the Hungarian Crown (sometimes the Sacra Corona meant the Land, the Carpathian Basin, but it also meant the coronation body, too). No king of Hungary was regarded as having been truly legitimate without being crowned with it.

In the history of Hungary, more than fifty kings were crowned with it, up to the last, Charles IV, in 1916 (the only kings who were not so crowned were John II Sigismund, Gabriel Bethlen and Joseph II).

The enamels on the crown are mainly or entirely Byzantine work, presumed to have been made in Constantinople in the 1070s.

The crown was presented by the Byzantine Emperor Michael VII Doukas to King Géza I of Hungary; both are depicted and named in Greek on enamel plaques in the lower crown. It is one of the two known Byzantine crowns to survive, the other being the slightly earlier Monomachus Crown, which is also in Budapest, in the Hungarian National Museum.

However, the Monomachus Crown may have had another function, and the Holy Crown has probably been remodelled, and uses elements of different origins. The date assigned to the present configuration of the Holy Crown varies, but is most commonly put around the late 12th century.

The Hungarian coronation insignia consists of the Holy Crown, the sceptre, the orb, and the mantle. The orb has the coat-of-arms of Charles I of Hungary (1310–1342). In popular tradition the Holy Crown was thought to be older, dating to the time of the first King Stephen I of Hungary, crowned in 1000/1001.

It was first called the Holy Crown in 1256. During the 14th century, royal power came to be represented not simply by a crown, but by just one specific object: the Holy Crown.

This also meant that the Kingdom of Hungary was a special state: they were not looking for a crown to inaugurate a king, but rather, they were looking for a king for the crown; as written by Crown Guard Péter Révay. He also depicts that "the Holy Crown is the same for the Hungarians as the Lost Ark is for the Jewish".

Click here to learn more about the Holy Crown