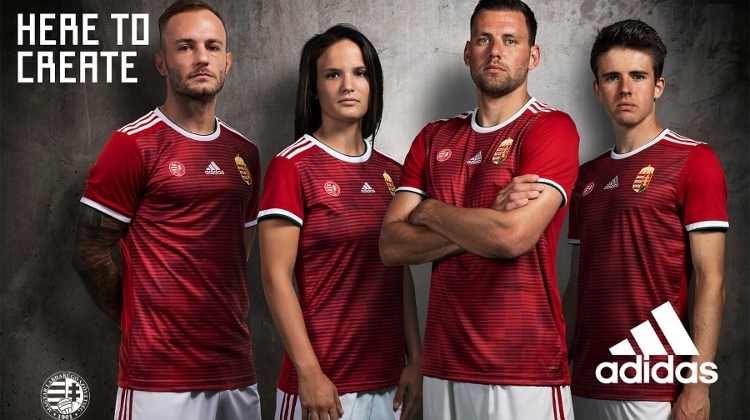 The new kit includes a modern-style cherry-red jersey which is a nod to the successes of the Aranycsapat – the Golden Team – which reached the 1954 World Cup final. The new 2018 kit was voted for unanimously by the current Hungarian national team squad.

The kit includes shirts which evoke the memory of the cherry-red ones worn by the Aranycsapat.

When designing the jerseys the firm took into account that the Hungarian public has a preference for the team sporting a traditional look on the pitch, hence why the kit remains loyal to the traditional red, white and green colour mix whilst including new, modern motifs.

A new feature is the incorporation of the crest of the Hungarian Football Federation – established in 1901 – and which helps minimise the possibility of fake goods.

“We’re proud that to have been supporting – albeit with a short hiatus – the endeavours of the Hungarian national football team for 54 years now, and that an increasing number of players are also trust in Adidas football boots when on the pitch.

It is our goal to offer footballers the maximum experience both in terms of quality and appearance, and to this end we continuously develop our products and strive to incorporate new innovations into our equipment from year to year”, emphasised Ildikó Oláh, head of Adidas Sport-Marketing.

Three different shirt versions were presented to the national team at the end of 2017, from among which the players could vote for the one which they liked best. The team voted unanimously for the shirt version now being launched.

“I’m delighted that Adidas aren’t only providing us with professional footwear but also the whole kit. It’s an honour that we shall be playing in this jersey for our Nations League matches as it evokes the successes of the Aranycsapat. It’s an important task that we tend to the memory of Puskás and the team of the 1950”, said national-team player Gergő Lovrencsics.

The new Hungarian national-team jerseys for men, women and children are now available at selected Adidas stores and brand partners, as well as at the MLSZ webshop.