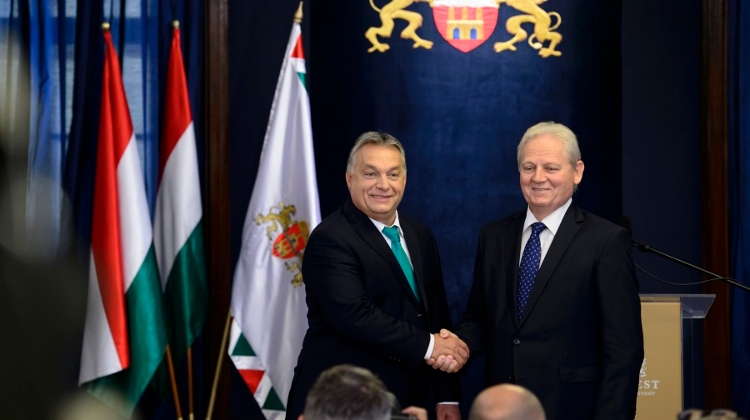 Prime Minister Viktor Orbán requested Mayor of Budapest István Tarlós to run for office again in the next municipal elections. The Prime Minister announced this after he had talks with Mr Tarlós.

They will decide on the most important of these at the Wednesday cabinet meeting which will also be attended by the mayor: they will set up a Budapest development council which they will lead together with Mr Tarlós as co-chair, and as part of this they will jointly develop and build Budapest, said the Prime Minister, observing that several of the developments to be launched will extend to 2030.

He informed the press that they had also managed to come to an agreement on the sum of tens of billions forints necessary for the refurbishment of metro line 3.

The Prime Minister said Budapest is the home of Budapest residents, and also the capital of the nation and a natural centre of the Carpathian Basin. It is this conviction that guides the government’s policies regarding Budapest.

He added that they had recently launched a great many Budapest development projects, and at the meeting with the mayor he presented a list of 60 items as proof that the government is committed to the development of the capital.

From among the already completed projects, he mentioned the reconstruction of the ice skating rink in Városliget and the National Riding Hall, the refurbishment of the Buda Vigadó, the Dagály swimming complex, the Music Academy and the Tomb of Gül Baba, as well as the Korányi project.

From among projects that are currently under way, he made specific mention of the refurbishment of the Buda Castle District, the Fiumei út cemetery and the Salgótarjáni út Jewish cemetery, the renovation of the Opera House and a new athletics stadium to be built according to plans.

The projects already completed were implemented from an allocation of more than HUF 280 billion, while the projects currently under way are worth over HUF 600 billion. These do not include transport projects which amount to an item in excess of HUF 700 billion in total, the Prime Minister added.

He also observed that the government had assumed debts worth more than HUF 217 billion from the metropolitan municipality.

“We all have a vested interest in Budapest regaining its old glory. The government itself is convinced that Hungary can only be a serious country if its capital, too, undertakes serious endeavours”, Mr Orbán said.

In his words, a strong, confident and popular mayor is essential for the attainment of these goals. He added that the opinions of the government and Fidesz district mayors coincide on the matter.

At the press conference Mr Tarlós announced that he has accepted the nomination.