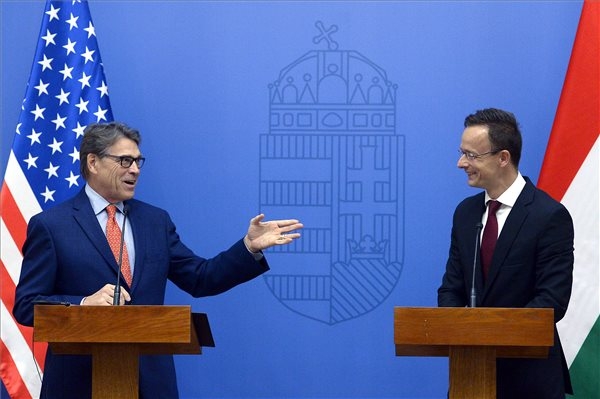 US Energy Secretary Rick Perry and Hungarian Foreign Minister Péter Szijjártó urged the diversification of central Europe’s energy supply at a joint press conference they held after talks in Budapest.

Perry expressed Washington’s opposition to the construction of a Russian pipeline that would supply gas to central Europe, saying that it did not want Hungary to be involved in the project.

Szijjártó named the LNG terminal under construction on the Croatian island of Krk and the exploitation of the Black Sea gas field as potential projects that could help improve Hungary’s energy security.

He added, at the same time, that the former project appeared to be “very expensive” at the moment while investment in the latter depended on the decision of an American and an Austrian company. Hungary is therefore counting on the US to help mediate in both projects, the minister said.

The Hungarian government has done its duty and concluded its talks with the parties involved in the various energy projects, Szijjártó said, adding that Hungary would do its part in creating the necessary infrastructure.

He added, however, that Hungary would also continue to rely on traditional energy sources and considers the criticism of central Europe for its import of Russian gas a “double standard”. Szijjártó argued that western Europe was in the middle of putting together a major energy deal with Moscow.

In response to a question, Perry said the US would continue to help Hungary and the region’s other countries with their energy agreements, as Washington considers energy supply important.

As regards Hungary’s upgrade of the Paks nuclear plant, which also involves American subcontractors, Perry said Washington respects the project, but added that Hungary and the US would have to discuss the instalment of small modular reactors.

The US is doing extensive research in this field and is also developing a variety of other technologies that can help it become the world’s leading oil and gas producer, Perry said. This way the US could also be of help to the central and eastern European countries, he added.

On the topic of US-Russia relations, the secretary said both sides must respect the rule of law. But, he added, since Russia had breached this principle, the sanctions that have been imposed on it are justified.

Szijjártó said Hungary would benefit from the Turkish Stream gas pipeline extending to its border, adding that “this cannot be a problem” since western Europe is expected to get a “much higher capacity” pipeline.