Digital Devices Have Their Place Under The Christmas Tree In Hungary 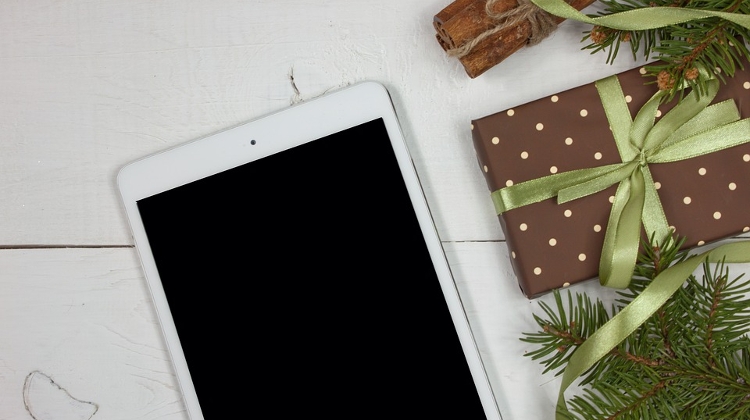 Giving presents to loved ones is the most widely spread Christmas tradition, and digital devices are seen more and more frequently under the Christmas tree.

These days, many are still pondering on the most desirable objects for family members. Do we know what our children, parents, grandparents or grandchildren want the most?

Digital Gadgets Are More And More Popular As Christmas Presents

Christmas is here in just one week. At this time of the year, digital devices are used more actively to involve distant family members in the festivities, and the increasing opportunities offered by digitalisation are utilised during the time spent physically together, too.

The shopping fever peaks in the pre-Christmas period because presents are exchanged in virtually all families where people spend time together. Digitalisation is gaining ground in this regard, too, both concerning the shopping method and the presents themselves.

Six out of 10 internet users buy some of the goods online, and the presents are no longer limited to gadgets but include digital services and subscriptions.

The most desired Christmas presents are quite diverse: the list is topped by products and services related to health and wellness (such as a bottle of massage oil or a bath season pass).

These were mentioned by one third of all adult internet users among the top three most desired presents. About 20% marked household appliances, clothing, books, beauty products, or home decoration. Digital devices are around the middle of the Christmas wish list, while digital services are at the bottom.

Overall, digital presents are not among the top three on the wish list, but most internet users would like to get them for Christmas. Laptop or desktop computers and smartphones are most popular, as 54-57% of the respondents would definitely like to get them from loved ones.

About 40% would be glad to receive a tablet computer, and two out of 10 people would like a digital picture frame, a game console, or a digital/musical service or subscription. 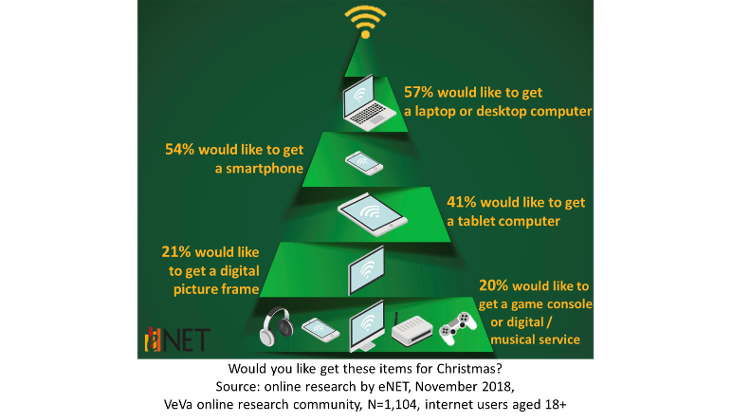 More (Grand)Parents Desire Digital Presents Than We Would Think

Adult Internet users admit that they don’t always know what some of their relatives want for Christmas. The objects desired by children are best known; what parents and especially grandparents want is regarded more of an enigma.

This is supported by the survey results; the comparison of who would like what for Christmas versus the ideal present that others indicate for that person yields several differences between the various generations.

Three quarters of those internet users who have children (of minor or adult age) claim to know what their offspring want for Christmas. The perceived preferences correspond to the reality in the case of adult sons and daughters, but the wish list of children aged 10-17 is farther from the ideal presents according to their parents.

Many more children would like to get computing devices and/or a mobile phone than the number of parents who consider these items as ideal presents. In some cases, we know what a family member would like but don’t consider it as an ideal present.

This is very frequent in the relationship between parents and children: three quarters of children aged 10-17 would love to get a laptop or smartphone for Christmas, and their parents are aware of that, but only half of all moms and dads would like to give such presents to their children. Such parental control is exercised in the case of all digital gadgets, albeit to a lesser degree.

Only half of all adult internet users think that they know exactly what their parents want for Christmas. And an even smaller group know what their grandparents would like. This uncertainty is reflected by the comparison of the desired objects with the intended presents.

Half of all internet-using parents would love to get a laptop or desktop computer or a smartphone, but only 25-30% of the respondents are of the opinion that parents would like such presents.

More parents would like to see a tablet (36%) and, surprisingly, even a game console (13%) under the Christmas tree than people think. Even grandparents would appreciate a laptop, a smartphone, a tablet or digital services than their grandchildren think, as opposed to a conventional phone (i.e. not a smartphone), which the elderly have little penchant for.

Overall, internet-using parents and grandparents are much more open to digital presents than expected. However, some of the difference between the actual and perceived preferences may stem from the fact that the survey respondents regularly use the internet, whereas their parents and grandparents who would receive the presents do not (necessarily).

This difference is probably expressed in their gift preferences, too. But we are all glad to give to our parents and grandparents the items that we think they would love.

Even though two thirds of grandparents think that they know what their grandchildren would like, they underestimate the attraction of digital devices, regardless of the age of those grandchildren.

Digital Activities Stepped Up At Christmas In Hungary