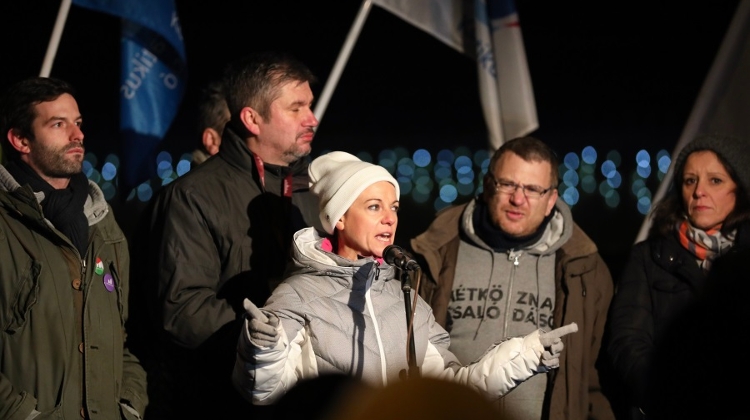 Independent opposition MP Ákos Hadházy has been physically thrown out of the headquarters of MTVA (Hungarian public television), after a group of opposition representatives stayed in the building all night in a bid to have five demands to the government read out on air, various independent sources reported.

After a renewed anti-government protest on Sunday night, which saw thousands of people marching from near the Parliament building to the MTVA headquarters more than six kilometers away, a group of opposition representatives went in the building to request that five demands of the protesters be read out on air.

The demands included calls for the immediate repeal of controversial laws relating to a new system of administrative courts and to rules on working overtime, passed last week amid commotion in Parliament and accusations of voting irregularities; a demand for the Hungarian government to join the European Public Prosecutorʼs Office, to be set up shortly as an independent body of the European Union; and a call for independent media to be restored in Hungary, with an end to what the petition describes as the "party-state propaganda" disseminated by state-run television news.

According to a Facebook Live feed and reports by multiple independent news outlets, including index.hu, hvg.hu and 24.hu, a group of opposition MPs were barred from entering the MTV studios by the buildingʼs security, with TV staff refusing to let them talk to the editor about their demands.

During the incident, M1, the main public television news channel, showed recordings of protests in Italy and Austria, claiming that those demonstrations are trying to undermine anti-migration governments, among other reports similar in theme, while only mentioning the protest in Budapest in passing.

Eventually, Ákos Hadházy, the former co-president of opposition party LMP who now sits as an independent, managed to read the five demands into a camera outside the studio rooms, but M1 refused to broadcast it (and were still refusing to do so at time of writing).

As the night passed, most protesters went home, but a number of other opposition MPs arrived on the scene. Reports indicate that the group of opposition MPs included members of the Socialist Party, LMP, DK, Liberal Party, and Jobbik. The group of MPs in the building tried to access the studios where the morning news program was being broadcast, but were denied entry by security staff.

In reaction, Hadházy tried to scale the stairway from the outside, resulting in security staff pushing him to the ground and carrying him physically back to the ground floor, where fellow opposition MP Bernadett Szél - likewise a former LMP co-president, and one-time prime ministerial candidate - was recording the incident on her mobile phone, broadcasting it on Facebook Live.

After a few minutes, security guards grabbed Hadházy and forcibly ejected him from the building. News site 24.hu adds that Szél was also pushed out of the door, causing her to fall to the ground.

The video can be seen here. The climax of the stair-climbing incident begins around the 39-minute mark, with the security removing Hadházy about 10 minutes later.

On Monday, news sources including 444.hu reported that Hadházy has called a further protest outside the MTV building on Kunigunda utca from 6 p.m. this evening, under the title "Kitesznek az ajtón, visszamegyünk az ablakon!" ("They put us out the door, we go back through the window!").

Other protests have also been announced in provincial cities; on Monday afternoon in Miskolc, Tuesday in Szombathely, and Wednesday in Eger, Nagykanizsa and Kisvárda.