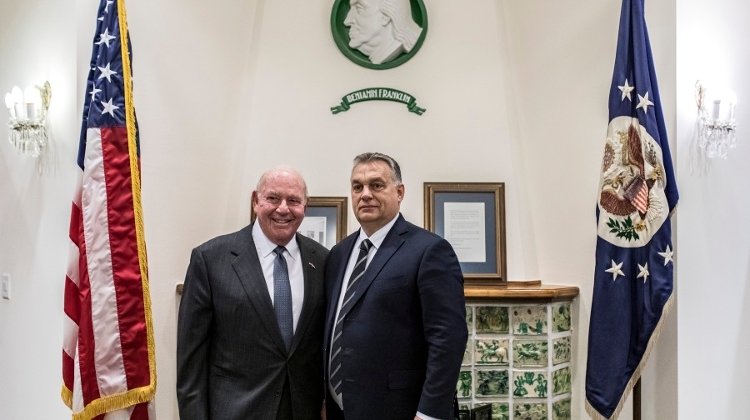 US Ambassador David B. Cornstein said on Thursday that Hungary and America “have elevated the dialogue” in recent months, while ties are friendly and worthy of two allies.

Speaking before parliament’s foreign affairs committee, the ambassador referred to the “deep bond” between the two countries, and said that “we’ve had our ups and downs, but as in any other healthy relationship, we’ve overcome those differences and emerged stronger and closer through honest and respectful dialogue”.

The ambassador said the question of NATO unity in respect of the situation in Ukraine was a priority for the US, which, he added, is committed to a democratic and free Ukraine.

“The United States has made it clear that our support for Ukraine is unbending.  We are committed to the success of a stable, prosperous, democratic, and free Ukraine. We support Ukraine as it counters Russian aggression and adopts reforms to increase prosperity, security, and rule of law. It is vital that NATO support Ukraine in its Western aspirations,” he said.

He also emphasised the importance of energy security and defense cooperation. Cornstein welcomed Hungary’s commitment to raise its defense spending by 2% of GDP by 2024 and he added that the US is ready to support Hungary’s ambitious defense modernisation plans.

“Our defense relationship is the envy of many nations, and now we are in the process of formalising this close relationship with the negotiation of a new Defense Cooperation Agreement. This agreement will bring us into the 21st century, and prepare us for new security challenges that we face together as Allies,” he said.

Regarding energy security, he said Hungary should find a way to diversify energy sources to reduce its dependence on Russia, and the US supports the planned project to build an LPG terminal in Croatia and the construction of the Bulgarian-Romanian-Hungarian-Austrian (BRUA) gas corridor.

Another important goal, he said, was to strengthen trade and investment relations between the two countries. US companies consider the government to be very supportive, and the workforce is well trained and industrious, he added.

Meanwhile, referring to the Central European University’s decision to move the bulk of its courses to Vienna, Cornstein said he was “truly saddened to see CEU leave” Budapest, saying its departure was “bad for Hungary”.

“Resolving this dispute was one of my top US priorities and was part of my daily discussions with Hungarian government counterparts at all levels,” he added.

He said ties had seen a substantive and qualitative change, with a return to dialogue based on mutual respect. The US is still one of Hungary’s top trading partners, and the security relations have never been as intensive as they are today, he added.

In terms of NATO cooperation, no substantive unresolved issues are on the agenda, besides the issue of Ukraine, where, he noted, there was an “open attack” on national minorities.

“Dialogue has started … and there is a sense of an easing of tensions in bilateral relations,” he added. In terms of energy security, Magyar said American and Hungarian interests coincided, and Hungary also believes it must make every effort to diversify its energy supplies.