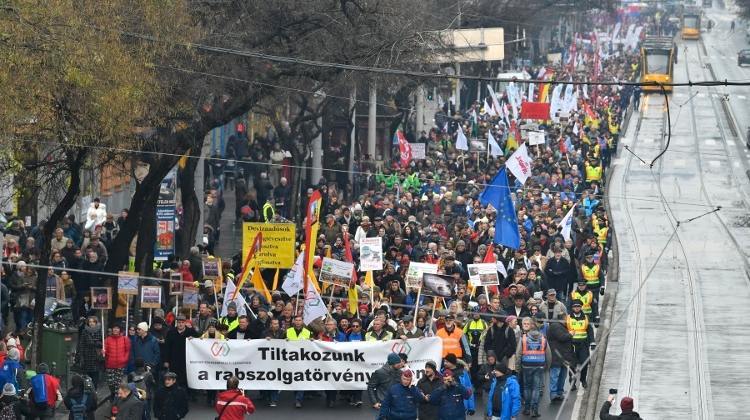 Trade unions mounted a protest on Saturday in central Budapest against the planned change to the labour code that envisages increasing annual overtime from 250 hours to 400 hours, among other measures.

László Kordas, head of the Hungarian Trade Union Confederation, told the sizable crowd that the trade unions were working to improve working conditions and therefore they wanted the planned labour code changes to be ditched. He also vowed that activists would block roads across the nation from Monday.

Kossuth Square was sealed by police, but demonstrators carrying trade union banners, blowing whistles and shouting anti-government slogans managed to get past a line of officers.

Last week, the bill’s proponents inserted changes to their original proposals, namely any overtime per year up to 150 hours above the 250 hour threshold “voluntarily entered into” must be concluded with a written agreement between employers and employee.

The bill amendments proposed by Fidesz MPs Lajos Kósa, Kristóf Szatmáry and Gábor Bányai also state that collective bargaining covers 300 hours of overtime, and 100 hours above that is possible only if there’s a written agreement between the employer and the employee.

Also, an employer will not have the right to fire an employee if they are unwilling to agree to extra overtime.