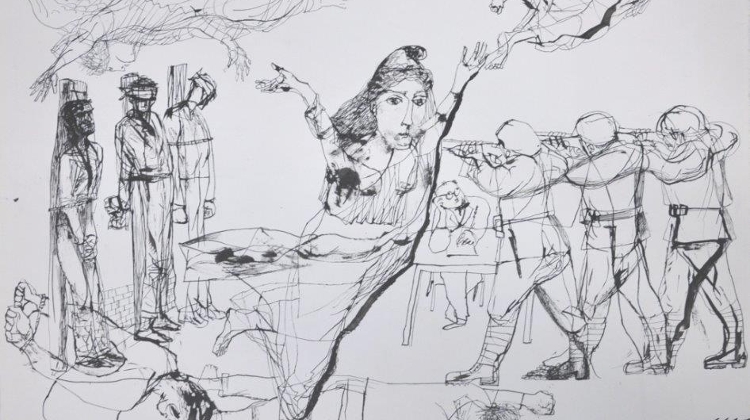 Now on until 6 January. The exhibition shows a selection of the art created by the Hungarian diaspora on 1956.

The works on display here immortalise the events of the 1956 uprising, its locations, participants, spirit and memory. What they have in common is that they were all made in the Kádár era (1956–1989/90) by artists who left the country either during or after the event.

Some works of art that found their way abroad during the fourth (1944-1947), and especially the fifth (1956) great wave of emigration from Hungary were made in the artists’ homeland, and taken out of the country by their creators. The majority, however, were created abroad in the free world, unfettered by fear and censorship.

The Kádár regime labelled the events of 1956 a counter-revolution, prohibiting and indeed punishing any positive references to the uprising. László Cs. Szabó described the period following the crushing of the revolution as a “Soviet military nightmare”, “new Stalinism”, and “another Bach era” (a reference to the period of neo-absolutist Austrian rule in the second half of the 19th century).

The artist witnesses who emigrated to the West had the ability to invoke the revolution credibly using a visual language.

Emigrants of the fourth wave did not live through the revolution, and thus they had no direct experience of it. They could only form an impression of the events through indirect experiences (discussions, radio broadcasts and press reports, photographs and the experiences of family members).

Many of the artists who lived through the revolution and subsequently left the country had their careers cut short. Even if they created works relating to the events of 1956, these have not been accessible in the past decades.

These artworks had either lost the ability to be repatriated (having been acquired by public and private collections) before the change of regime made it possible to return to Hungary, or had been physically destroyed.

The exploration of works dealing with the issue of 1956 was (and still is) further impeded by the fact that during the Kádár era the press organs of the Hungarian emigrant community – which were also important for artists in Hungary, as a means of keeping the memory of the revolution alive – were treated as strictly classified material; so we were also cut off from sources of published information.

Some of the artists who left for the West took their works inspired by their direct experience of the revolution with them to their adopted countries, and later created new ones in response to the inner drive to express what they had been through and how it had affected them emotionally.