American Startup Moved To Budapest To Develop Its Business 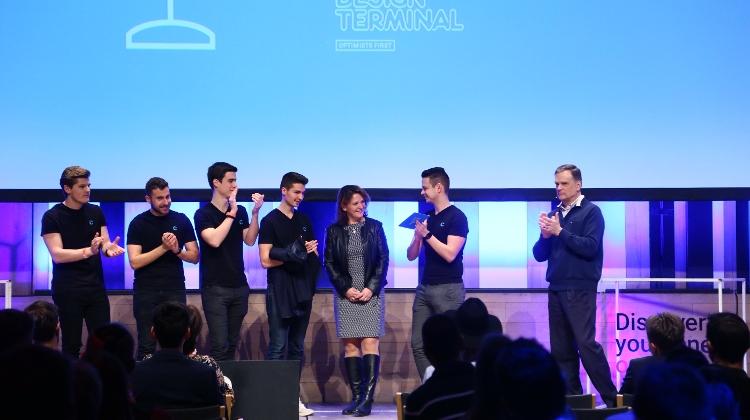 The autumn semester of Design Terminal’s 2018 Mentoring Program ended after record-breaking number of applicants and months of never-seen intensity.

Teams from 56 different countries have applied for the program of the autumn semester which just ended. Among them the Boston-based SocialMap has only moved to Budapest to participate in the program.

During the three months of the Mentoring Program the teams could not only improve their businesses but have also learned how to cooperate with corporate partners. This improvement was made possible with the help of the professional, outstanding mentor-community.

This autumn semester was the most intense phase in the history of the program since 2014 as all teams could move to the next level with their startups.

Cogito which is a community platform helping efficient learning, could develop its MVP, acquired the first paying customer, has now a new team member and participated at the global finals of the Pitch@Palace startup competition, founded by Prince Andrew, the Duke of York.

Photon, dealing with the placement of photographers and video makers opened a new chapter of its activity. They significantly improved during the three months in the following areas: team, management, product, strategic thinking, sales and marketing.

For the American SocialMap the biggest achievement during these months at Design Terminal was to change their market strategy.

The online helpdesk developer Wellcome.chat is no longer just an idea for a good solution, but an existing service with two paying customers, the number of its business relations grew from 20 to 70.

The global finalist of Microsoft Imagine Cup, Innobie which uses extended reality in teaching, launched the beta version of its platform that was already in action in two schools.

"The accelerator program helped SocialMap to make very important and strategical business decisions. For example, we expanded to a more attractive and profitable space with our product."– Pedro Melgarejo, SocialMap.

“Mentoring, professionality and inspiration in a quality, like nowhere else! From ideas, initial processes to organized management, released prototype and first paying customer in only 3 months.”  – Máté Majtán, Cogito.

The teams presented how far they have developed during the Mentoring Program on the Demo Day where they could win such valuable offerings like a 6-month office usage opportunity by HubHub, Budapest's newest community office space.

During the evening, the world-renowned medical futurist, head of The Medical Futurist Institute, Dr. Bertalan Meskó provided insight into the world of digital healthcare.

The application for the spring semester of the Mentoring Program opened on the 15th of January. Design Terminal awaits the most innovative local and international startups to apply at its website.

Design Terminal is an innovation agency, operating as a bridge between the startup ecosystem and the corporate world. They think that innovation is the key factor of competitiveness, speaking of small enterprises or large companies.

Thus, their aim is to find the best matches between the two, provide them professional assistance in the cooperation. They believe that it is mutually beneficial for both sides: startups can have access to the global market and corporations can implement the latest innovations.

Teams participating in the mentoring program of Design Terminal in autumn 2018:

SocialMap (US)
It is a tool for analysing corporate employees. Socialmap analyses the employees’ verbal and non-verbal communication through teamwork, using artificial intelligence and machine vision to help managers improve team dynamics.

Cogito (HU)
Cogito is a community platform helping efficient learning, through which students jointly prepare notes that can also be checked by their teachers. They have already involved 800 students in order to develop their product, and their aim is to reach 70 percent of those in higher education within five years.

Photon (HU)
It is an online agency that deals with the placement of photographers and video makers. Photon does not simply deal with placement, but it matches the appropriate workforce with the suitable project.

Innobie (HU)
It is an award-winning Hungarian innovation that makes education more experiential with the help of extended reality. Innobie, founded by university students in Vojvodina, won the domestic round of the Microsoft Imagine Cup and reached the global final.

Wellcome.Chat (HU)
It is a team that develops an online live helpdesk. Wellcome.Chat helps businesses increase customer satisfaction and acquire new business opportunities. Their service is based on a user-friendly chat window that can be embedded in any website and can be used without registration or login. After the change of the strategic direction, the company opened up to commerce too.