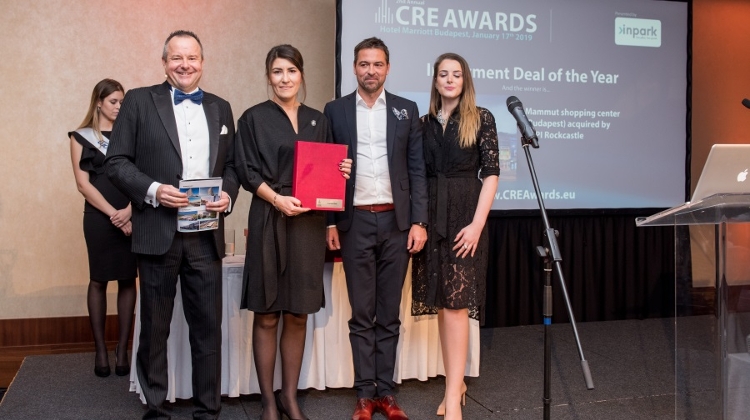 EuropaProperty has held its 2nd annual CRE Awards at the Marriott Budapest Hotel, on the banks of the Danube. The quality and number of commercial real estate nominations suggests an underlying, and growing confidence in the region’s property markets.

The event brought together some of the top-performing firms and professionals operating in the CEE region. Chosen by members of EuropaProperty’s CRE Awards Academy, this year’s winners were recognized for their continued market success and achievements in 2018.

Major winners included Wing, GTC, and Belgrade Waterfront. Wing was recognized by the jury for its excellent year of deliveries, disposals and acquisitions in Hungary. The company walked away with the “Overall Company” and “Office Developer of the Year” awards.

Developer GTC also scooped a couple of the main prizes including “Office Project of the Year” for its recently opened GTC White House project in Budapest, and “Professional Woman of the Year” for sales and marketing director Bori Gedai.

The company was also recognized as “Retail Developer of the Year”. Other Serbian winners included PSP-FARMAN Holding for phase one of its residential development West 65.

Other project winners included the developer Luka Living, winning with its first foray into the residential sector with the eponymous mixed-use Luka Living project in Prague. “Refurbishment Project of the Year” went to CEETRUS for its Budaörs refurbishment.

Gránit Pólus Group was recognized for its continued excellence in property development and management and took away awards for its mega successful shopping center in Budapest, WestEnd City Center and the “Cultural Project of the Year” award for the Palace of Arts and Budapest Sportaréna.

The “Investment Deal of the Year” title went to NEPI Rockcastle for its acquisition of the Mammut shopping center in Budapest. Meanwhile, Bluehouse Capital picked up the award for “Investor of the Year”, on the back of its successful investment strategy throughout the region.

Overall “Professional of the Year” went to JLL’s Benjamin Perez-Ellischewitz. The international consultancy also collected “Agency of the Year”. Relative newcomer to the market, Eston International, won “Property Management Firm of the Year”.

Other company winners included First Title Insurance, which picked up the “Professional Service Provider of the Year” for the second year running, a feat repeated by Lakatos, Köves and Partners, which once again won “Law Firm of the Year”. Luka Living picked up “Residential Developer of the Year”.

Company of the Year awards were presented to the leading companies in the region for their activities and accomplishments during 2018. Companies were judged on their overall market contribution, quality of customer services, market innovation, commercial success, leadership and market penetration.

Accentuating the interest in the region’s retail sector, a few key retailers were shortlisted. The eventual winner of the “Retailer of the Year” was F&B retailer Fresh Corner. The title was given to the most active retailer throughout the region based on its market innovation, expansion, contribution to the market, market share, concept and design, and commercial success.

The awards were judged by an independent elite panel of industry professionals from some of the leading commercial real estate companies in the region. The jury selected the winners of the awards from the shortlisted companies.

In order to ensure maximum objectivity and transparency of the final results, the judging procedure is overseen by Big Four professional services firm EY.