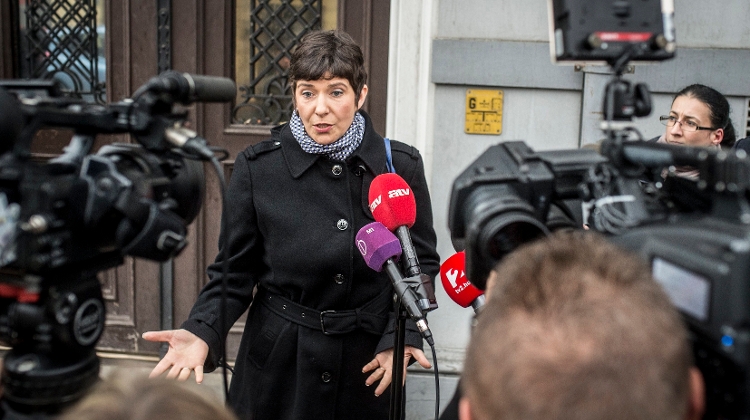 The Demokratikus Koalíció announced on Friday that Klára Dobrev, the wife of Ferenc Gyurcsány, will head the DK list for the European parliamentary election.

At the time I heard the news I was still moping over the fact that the left-of-center parties refused to put together a common list, which I’m convinced would have produced better results for the opposition parties.

The first opposition party to declare its intention to go it alone was DK, which disappointed me greatly. Then I heard that LMP would also try its luck alone, although for a while they couldn’t decide who would lead the troops. In the end, Gábor Vágó was chosen.

I have my doubts that LMP will garner 5% of the votes.

I have the same problem with Momentum, and I fear that the Two-Tailed Dog joke party will also throw its hat in the ring.

And now comes the surprise that Klára Dobrev is heading the DK list and that, unlike Bertalan Tóth, chairman of MSZP, if elected, she will be off to Brussels.

I have nothing personally against Klára Dobrev. In fact, I think very highly of her. But I’m not at all sure whether nominating the wife of the party chairman to fill an important political position is a good idea.

Although Klára Dobrev is one of the founding members of the Demokratikus Koalíció and is often seen at party conferences and congresses, she has never held any formal position in the party.

In 2004, when her husband became prime minister, she had to resign as vice-president of the Office for the National Development Plan and EU Support, which handled the EU programs, a job she dearly loved.

Otherwise, her field of expertise is accountancy law. Because of her past work with EU offices, both as a government employee and later as CEO of Altus, she is a good fit for work in Brussels but, let’s face it, she is a political rookie. (Or as much as the wife of Gyurcsány can be a political rookie.)

Still, given her intelligence, I’m sure she will learn the ropes quickly enough.

Two opinion pieces by journalists critical of the Orbán regime were quick to express negative sentiments about DK’s decision. One of these journalists, András Hont, interpreted her nomination as a sign that DK is nothing more than “a family business.”

Admittedly, Hont has never had a good word to say about Gyurcsány or DK, and therefore his reaction is not surprising. The second negative opinion came from András Stumpf.

He also called DK “a family business,” except that he sarcastically added that if Ferenc Gyurcsány himself headed the list, DK would have gotten an enormous number of votes from people who wish Gyurcsány straight to hell.

They would have voted for DK just to get him out of the country. Some other well-known journalists, whom I respect, think that putting Dobrev at the head of the list is a capital idea. Well, we will see.

Klára Dobrev is the granddaughter of Antal Apró (1913-1994), a hard-line communist functionary who by 1971 was relieved of all his posts except speaker of the parliament, which in the communist system was politically insignificant.

Fidesz has used Dobrev’s lineage as a convenient weapon against Ferenc Gyurcsány for years. This time, of course, they will use it against her.

Although we have always known that the Demokratikus Koalíció is “the most European” party, as they like to style themselves, it was still somewhat surprising to hear Dobrev say as a first item on her agenda that “we will be building the United States of Europe.”

Keep in mind that Orbán’s recent political career has been centered around the fight against a U.S.E. It is also a topic that other left-of-center parties avoid, fearing a backlash of Hungarian nationalist sentiment.

She played down the difficulties the EU is experiencing now and assured her audience that “Europe will be united and Europe will be strong. The only question is whether we Hungarians will belong to that Europe.”

(3) The introduction of a European tax on multinational companies to finance these programs. If the 28 states together negotiated with these large companies, they would be in a better negotiating position, claimed Dobrev.

This afternoon Klára Dobrev was Egon Rónai’s guest on ATV’s Egyenes beszéd, where she explained that in her opinion monthly checks from the European Union for families with children and for pensioners would bring the European Union, which currently is nothing more than an abstraction for most Hungarians, closer to the people.

This makes sense to me, but of course I have no idea whether there is any chance of selling this idea to the politicians who make up the leadership of the European Union.

I can tell you one thing, the listeners of Klub Rádió, right-wingers and left-wingers alike, praised it as a really social democratic program.