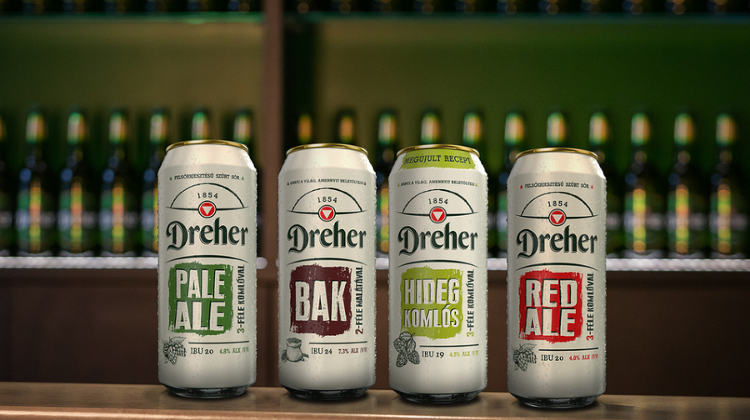 After the earlier transformation of its Dreher Classic into Dreher Gold, the Hungarian brewery has announced the introduction of a brand new Dreher Red Ale and a new appearance for the companyʼs products.

“With the creation of the new recipe, our aim was creating an easily drinkable, yet characteristic beer,” says Péter Séra, brew master of Dreher Breweries.

“Dreher Red Ale is a beer with a roasted aroma of caramel and malt, achieved with the use of Kazbek, Citra, and Chinook hops. When poured, it is easily recognizable from its reddish-brown color, and cream-colored crown of foam.”

In the brewing process of Red Ale, the yeast rises to the top of the beer at the end of the fermentation process at 15-21°C, contrastingly to lagers. This is where the term “top fermented” comes from, explains Dreher. The brewery introduced its first such beer, the Dreher Pale Ale, in 2018; it became an instant hit.

Furthermore, the brand also announced the complete removal of corn from the ingredients of all its beers, including the Hidegkomlós (cold hops) variety. The triangle in Dreherʼs symbol also gains significance as all variants will be made exclusively with three ingredients: hops, malted barley, and water, the firm told the BBJ.

“We are experiencing that with a varied product family, we are reaching an especially wide group of consumers, and even getting through to a new audience,” says Fruzsina Négyesi, head of Hungarian brands at Dreher Breweries.

“This is why we paid special attention to turning the brand portfolio into ʼpremiumʼ from all aspects, with the arrival of Dreher Red Ale. The individual variants receive a unified, clear-cut appearance, and we have ditched corn grits as an ingredient from the recipe of Hidegkomlós.”