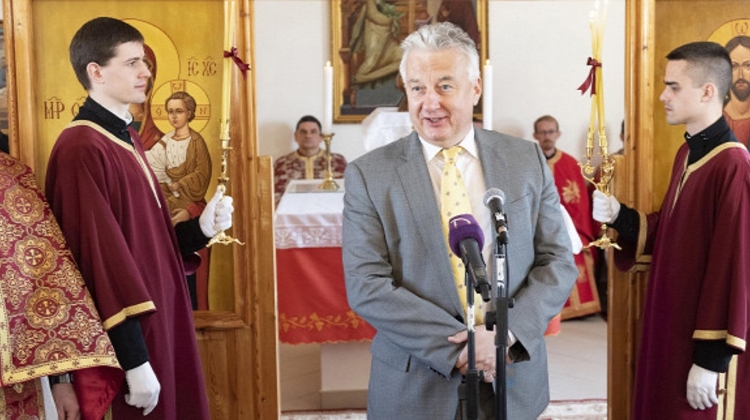 A few days ago there was an article with a startling title, revealing that Hungary is the most generous country in the European Union when it comes to spending tax dollars on sports and churches.

As Civilhetes, an internet news site, said, the amounts spent are “absurd.” In 2016 the Hungarian government spent 7.1% on sports and religion while the EU average, according to Civilhetes, is only 2%.

There is a slightly different figure, compiled this month by Eurostat, on EU government expenditures on recreation, culture, and religion which was even lower than that. In 2017, such expenditures were only 1.1% of GDP.

Even more dramatically, they spent 171 billion forints (€541 million) on churches in 2016, whereas in 2015 this figure was 60 billion (€190 million). Part of this money went to renovate churches and parochial schools; another significant chunk was given to the churches in the form of unrestricted grants, money they could spend on whatever they wanted.

Given the enormous size of these contributions to churches, it is not surprising that the reaction to a  recent comment by Zsolt Semjén (pictured on top), chairman of the Christian Democratic People’s Party (KDNP) and deputy prime minister, was a mixture of disgust and outrage.

Semjén, in a speech on the occasion of the consecration of a Greek Catholic church in Tisztaberek in Szabolcs-Szatmár-Bereg County, announced that he “can’t imagine a better investment of budgetary resources than in religious institutions.”

Quite independently from the nonsensical nature of Semjén’s claim, let’s take a practical approach to this newly renovated Greek Catholic Church.

Tisztaberek’s population is 665, the majority of whom most likely belong to the Hungarian Reformed Church. According to the latest census, only a tiny fraction of the county’s population belongs to the Greek Catholic Church.

Looking at it from the point of view of the harsh world of finance, the renovation of this church doesn’t seem to be the best of investments. The Hungarian government “invested” 14 million forints in the building.

The Greek Catholic Church seems to be a favorite of the Orbán regime. The Hungarian government gave almost one billion forints to the Greek Catholic Archdiocese in Aleppo a couple of years ago.

At home, the Greek Catholic Church, which is perhaps the smallest denomination in Hungary, has been the recipient of numerous schools, where they subsequently segregated Roma children from the rest of the students.

Semjén has peculiar ideas about the role of churches in the post-enlightenment era, looking upon them as conduits of culture. Moreover, in his opinion, “the country itself can develop and grow strong only if churches and church properties are renewed.

In what will undoubtedly be a lavish show of support for the Catholic Church, the Hungarian government will sponsor the International Eucharistic Congress of 2020.

First, a few words about the history of this event. The Eucharistic Congress is supposed to be “a gathering of clergy, religious, and laity to bear witness to the Real Presence of Jesus in the Eucharist.”

It dates back to 1881, when it was first held in France. Congresses have been held every year, with the exception of the years between 1915 and 1923 and again between 1939 and 1951. One of the last congresses before World War II was held in Budapest, and its theme was “Eucharist, the Bond of Love.”

The papal legate to this congress was Cardinal Pacelli, later named Pope Pius XII. Over 100,000 people from all over the world attended the congress, including 15 cardinals and 330 bishops.

That Eucharistic Congress was described as a “colossal event,” which involved tremendous organization across five continents and I assume also cost a great amount of money.

From what we learned from Cardinal Péter Erdő, archbishop of Esztergom-Budapest, the 2020 event will also be an expensive affair, paid most likely by the Hungarian government.

We don’t know whether the amount of money the Orbán government has already spent and will spend in the next year on the congress will be included in the sums allotted to the Catholic Church, or, more likely, will appear on the books as government financing of tourism.

The theme of the 2020 congress will be “solidarity and friendship of people,” a real laugh given the Orbán government’s attitude toward both concepts. Péter Erdő added that “the Eucharistic Congress is not a political event, but it will definitely carry societal messages.”

The official congress will start with mass in the Ferenc Puskás Stadium, where throngs of boys and girls, arriving also from the neighboring countries, will receive their first communion. The four-day event will end with another mass on Heroes’ Square, just as in 1938. There will be a lot of masses in between, but lighter entertainment is also on the agenda.

The Csík Orchestra, the 100-member Gypsy Orchestra, and Ákos Kovács will perform in between religious activities. The first is a folk group, although looking through the members’ bios, there seems to be no one with any ties to Csík County in Romania.

Ákos Kovács is an aging rock star of sorts who believes that women should receive less money than their male colleagues and that their real task is “the fulfillment of their primary function. Let’s say to belong to someone. To give a child to someone.”

After these enlightened words, Magyar Telekom cancelled a contract with Ákos, a great favorite of Orbán, who, in retaliation, instructed all ministries to cancel their telephone subscriptions with Magyar Telekom. Now Ákos is the church’s or perhaps the government’s choice to entertain the faithful.

The program is so crowded that it is not possible to mention all of the events, but there is something to say something about the Paulists of Częstochowa (Poland), who will be celebrating the birthday of Blessed Özséb (Eusebius), founder of the Paulite order, the only significant Hungarian order, not to be confused with the American Pauline Brothers.

Not being familiar with monastic matters, it was surprising to learn that the order spread to Poland and that today there are more Paulites in Poland than in Hungary. The problem with their birthday celebration is that we know, or speculate, only that Özséb was born “sometime around 1200.”

Further reading revealed that there is a good possibility that Blessed Özséb didn’t really exist or, if he did exist, he wasn’t the one who established the Paulite monastic order. Information on his life comes from a sixteenth-century history of the order.

But later historians who studied the order found no mention of Özséb in any of the existing documents from the fourteenth century. So much for the jubilee prayer celebrating the alleged Özséb’s alleged birthday.

In any case, large crowds will come, Péter Erdő hopes, and hundreds of journalists will attend. An ornate train that carried the future pope and high dignitaries of the church in 1938 will be refurbished to take the distinguished guests to the Basilica in Esztergom. It's hard to think how much all that will cost the mostly irreligious Hungarian taxpayers.