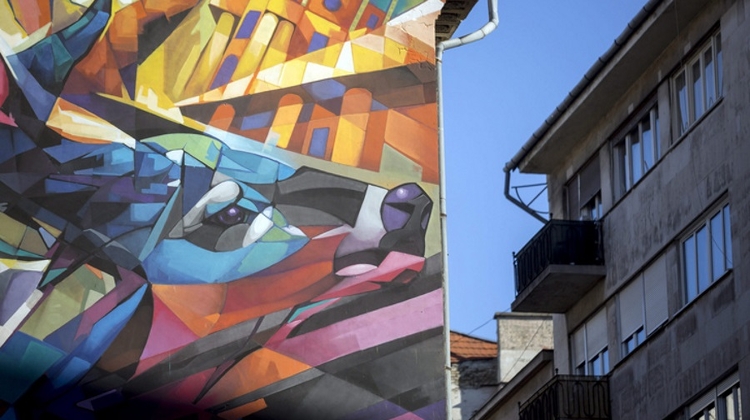 Street Art is practised in all kinds of dimensions in Budapest, from small stickers to huge wall paintings on previously ugly firewalls.

This art form, which is creatively presented in open space, would like to make art available to everyone. Neopaint Works, one of the most important representatives of the street art scene, told about about the background of this special form of painting.

Everyone surely has already stumbled across them in Budapest and perhaps even stopped for a second to stare. No wonder, since they are hard to miss due to their size: large, free-standing house walls painted with bright colours, making up unique artworks, the so-called murals.

You can find them all around the city but especially in District VII, which has a broad selection of this kind of artwork.

The formerly rather neglected Jewish Quarter has developed into one of the most popular Budapest neighbourhoods in the past years. A few years ago it was dominated by run-down houses and bald parking places, surrounded by sad firewalls.

Giving the district a new chance

"We wanted to give the district a new chance," Barnabás Jankovits, the founded of Neopaint explains when we ask how he got the idea to paint whole house walls.

"We wanted to show the mayor that we have the chance to create something unique here, which is good for the district and good for the city."

In 2011 Neopaint completed its first mural on a firewall in Király utca, on the corner of a playground. "This mural was meant to be an example showing how to beautify the city by a lot in just a short time. This is why we made the first one for free."

However, as Jankovits explains, it was not at all easy to get authorisation. "It took more than a year before the mayor authorised it. There had been no former references. Nobody could know how it would work out."Furthermore, five different authorities had to approve.

When the authorisations were finally available, the once bald firewall completely changed in just a week. "It was a huge success," Jankovits tells us proudly. "The media reported about it and everyone was thrilled."

When he founded Neopaint 15 years ago, he never dreamed of becoming so famous in the Budapest street art scene. Actually, it was not the murals but a completely different business idea that made him found the company, which consists of three full-time employees and about ten freelance artists.

It all began when he was just a boy, Jankovits remembers, in a time when this whole lifestyle was still new. Many of his friends began to paint and spray on walls, both legally and illegally.

"At a point of time I noticed that many people like this kind of art; not only the graffiti but the legal wall painting with real artistic value. People were looking to make contact with the artists to decorate their homes, restaurants or business rooms."

This is how the ultimate business idea of Neopaint was born in its founder’s head. He tells us with a shrug: "I am not the best artist but I am very good in organising. This is why I began to work as a contact person between artists and clients who were looking for good, quality pictures."

In time the young company received more and more assignments, mainly from companies that wanted to decorate their offices but also from private persons. The price for painting a wall depends on different components, such as the size, the material costs, working hours and the difficulty of the painting technique.

Have there been any accidents while painting? Jankovits knocks on the wooden table three times and answers with obvious relief: "Fortunately not, we are always very careful. We closely collaborate with a scaffolding company and everyone is secured with straps while working."

The work on the murals often takes place at dizzying heights. One of the first questions that he always asks artists who apply to the company is if they are afraid of heights. "Well, as for myself, I am," Jankovits confesses with a grin, but this is no problem as he mainly takes care of the bureaucratic aspects and organisation, most of which happens at ground level.

For the artists, however, being able to work with a steady brush at height is a must because the team does not work with pre-fabricated stickers that need to be glued on. They complete every single mural by hand with brushes and real exterior façade paint.

As the 37-year-old owner reports, it was hard work to get Neopaint where it is today. "I never wanted to do anything else. We did not just want to get rich. This has always been my goal and I knew that if we work hard and invest a lot of time and energy, then we can do it. This is a dream come true."

The Neopaint team has been painting the firewalls of Budapest for the past seven years but they are not the only ones. In the framework of the Színes Város Festival (Colourful City Festival), which has been organised for the fourth time in the Hungarian capital, artists are invited from around the world to beautify the empty walls of the city with their artistic murals.

The festival aims to present the versatility of existing styles, combined with the appeal to people to be open to new things and to learn to value diversity. If you look more closely, you can find clear differences between the works of Neopaint and artists of the Színes Város Festival.

When compared to the sometimes abstract, colourful paintings of these latter artists, who all paint in their own unique style, Neopaint seems to be rather conservative.

During the interview the founder emphasised expressly that they do not consider themselves as street artists. "We are graphic designers. As opposed to street artists, we are not aiming to present our own styles. Everything that we do is not for ourselves but for the public."

Neopaint’s focus is having an effect on the public. For them the most important thing is that their murals match their environment and its history. "We want to point something out and give information," Jankovits explains.

"It makes me happy and proud to see when tourists stand in front of one of our works, and I can see that they are not only taking a photo and moving on, no, they are really interested for what is lying behind the picture."

He presents one of the most popular murals as an example: Rubik’s Cube. This painting was completed by Neopaint in 2014 both to honour the 70th birthday of the Hungarian inventor, Ernő Rubik, (who was appointed an honorary citizen of the capital in the same year) and to commemorate the 40th birthday of the popular cube.

Jankovits says he has a special connection to this mural. "We had the opportunity to discuss the picture personally with Ernő Rubik, to find out how we were able to make something really artistic out of it." It appears they succeeded.

Looking at the cube more closely reveals that it’s composed of numerous crosses, which altogether form the 250-square-metres large magic cube. The inventor is commemorated with a citation on the left side: "There is always a solution – and not only one."

The murals are no doubt unique works, already just by their presentation on the largest canvases of the city. This however can also mean a disadvantage by being too temporary.

"When we are selecting the wall to be painted, we take care that the firewall won’t disappear the next year. In order to make sure, we are collecting information about the wall from all kinds of sources and we talk to the owners," Jankovits says.

Unfortunately, there are no guarantees. Just recently two Neopaint works were destroyed because the owners wanted to use the walls for promotion.

The artists of the Színes Város Festival have also seen several of their murals erased by newly built houses recently. "The murals are like children to me," the Neopaint founder says, "so of course I am sad when they are destroyed."

Street art is often presented in large dimensions but sometimes in smaller too. Especially when transmitting critical messages about politics or society, artists often reach back to more compact formats, sometimes just small stickers. Despite their smallness, the messages are seen and understood, especially by the locals.

An excellent example was the excitement last June about a parodic presentation of Hungarian Prime Minister Viktor Orbán. The wall painting depicted him sitting on a small blue train based on the children’s show "Thomas the Tank Engine".

Although it was quickly removed, the mural went viral in only a few hours. The satirical party Magyar Kétfarkú Kutya Párt (Two-tailed Dog Party), which mocks and provokes the political elite by using all kinds of street art, took credit for the mural.

While these kind of messages are sometimes hard to locate, the team of Budapestflow can help. They offer a three-hour tour for EUR 45 per person, giving a glimpse of the history, culture and creative concept of the Budapest street art scene.

Besides visiting the large murals, the tour guide presents graffiti and other forms of street art and offers a broad knowledge of the topic, such as information about the artists and the social-political background of the works.

The Budapestflow tours are for small groups of up to five people, thus distancing themselves from the classic tours with large groups. As the founder explains, direct communication is very important for the Budapestflow activists.

They want to bring the variable and steadily growing street art scene closer to people, to introduce their guests to its background, and to point out the connections of the artwork with history and culture.