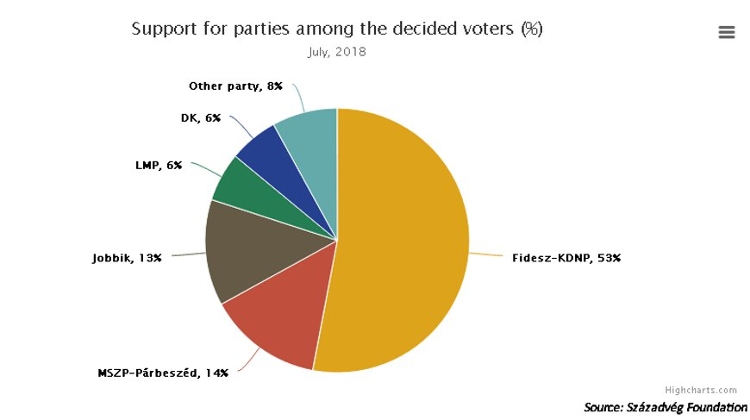 With just over a month to go until the European parliamentary elections, the ruling Fidesz-Christian Democrat alliance has widened its lead over rivals, according to a fresh poll by the Századvég Institute.

If the elections were held this Sunday, 36% of the entire electorate would vote for Fidesz.

In the whole sample, 9% would vote for the opposition nationalist Jobbik, while the Socialist-Párbeszéd alliance would garner 7% of the vote.

The leftist opposition Democratic Coalition (DK) would get 5%, with opposition LMP and the liberal Momentum Movement both standing at 3%, the poll showed.

The radical nationalist Mi Hazánk (Our Homeland) Movement would get 1%, with all other parties garnering 2% of the vote.

Fully 34% of those asked were uncertain of their party preference.

Among decided voters, Fidesz is supported by 54%, Jobbik by 14% and the Socialist-Párbeszéd alliance by 10%.

DK is backed by 9% while LMP and Momentum are each supported by 4%. Mi Hazánk is backed by 2% of decided voters, while all other parties have a combined 3% support.

Századvég’s phone poll was conducted between April 10 and 21 with a randomly selected sample of 1,000 voting-age adults.

Fidesz currently has 12 delegates in the EP, Jobbik has 3, the Socialists and DK have 2 each and LMP and the now-defunct Együtt-Párbeszéd alliance have 1 each.