Hungary’s Ad Market Continues To Grow, Albeit At Slower Pace 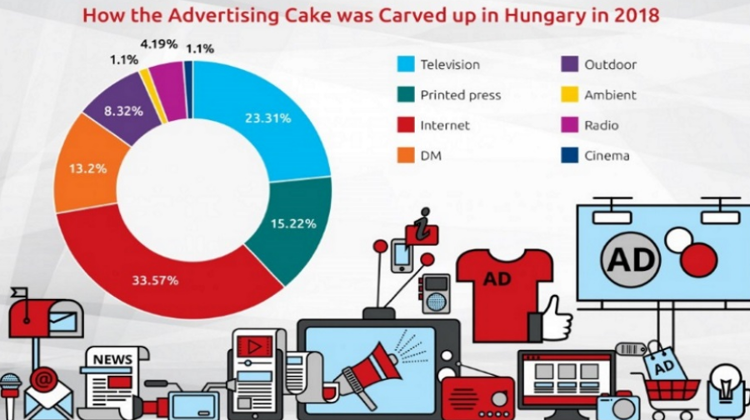 Increasing from a year ago but slowing down compared to 2015 and 2016, advertisement spending grew 7.77% last year, MRSz announced at the Evolution conference, an event for the advertising industry on February 28.

“[...] The higher share of growth came from market advertising spending as the rate of massive and strong state investment in previous years stagnated in 2018,” explained János Gulyás, head of MRSz.

Each media type managed to keep hold of the position it achieved in the previous two years; in fact, they all increased revenues compared to last year. TV ad spending grew less than 1%, most of which came from the market as state ad spending decreased by 2% for the first time in the past two years.

Spending in the print press had grown a lot in 2017, with the association suspecting that such pace was not sustainable, Péter Hivatal, a member of the management of MRSz said. Still, it managed to increase ad spending by 3.5%. Unlike the case with television, market spending in print decreased, Gulyás said.

Digital media’s share of the advertisement cake has been in 14-16% range for years: last year it reached 14%. Here, global players have been the main drivers of the growth in the sector, whose overall share has grown to 55%.

The outdoor segment saw the biggest increase (up 16.28% from 2017), though much of this growth was due to price hikes players were forced to make as a result of higher taxes.

With 15% increase, movie segment came next in terms of growth, followed by digital media (up 13.98%). Radio ad spending was also remarkable, with 9.5% growth from last year.

Online ads remained the largest market player, and increased its share in the cake to 33.57% from 31.71% a year ago: spending totaled HUF 90.3 bln in 2017. Except for email, every subsegment grew. Much of the spend has shifted to mobile ad.

TV ad spending was over HUF 60 bln (a 1% increase from 2017) – the figures are based on the voluntary data provision of 69 television channels that basically cover all the ad spending, Krisztián Kovács, head of the Hungarian Association of Electronic Broadcasters (MEME) explained.

The share of spot ads is 94%, while non-spot ads accounted for the remainder. The increase in non-spot spending, was higher (at 9%) than that for spot ads (0.5%), although they start from very different levels.

That the advertising cake is getting bigger is a good thing, but as a share per GDP, ad spending has been decreasing in the past few years, Gulyás said. By way of comparison, ad spending as a percentage of GDP in Hungary is around 0.6%, while in the United States is around 1.2%.

“Our study shows that every forint spent on advertising result in six forint in GDP growth, so it is worth investing in advertising,” Gulyás added.

Adverts in the printed press grew by 3.5%, reaching almost HUF 40 bln last year. It is still well below the pre-crisis 2008-levels, and only in the past two years has it bounced back, says Tibor Kovács, head of the Hungarian Publishers’ Association.

Daily newspapers continue to take the lead, and this subsector, along with gastronomy and home decor magazines, have all managed to grow for the past three years. Dailies, however, depend to a great deal on state ads (one daily alone received HUF 544 million in ad spending).

The printed press traditionally has two sources of income, with the bulk of earnings coming from subscriptions and newsstand purchases, which still come to more than HUF 100 mln of the revenues publications generate (including revenues related to digital sites’ content).

“We have been creating transparency reports for years: it turns out that the top two hundred spenders spend 93% of their advertising budgets on transparent, audited publications,” Kovács said.

Within the Visegrad Four countries (the other three being Czech Republic, Poland and Slovakia), Hungary ranks third in ad spending as a ratio of GDP. That needs to be improve through innovative solutions, Kovács said. However, looking at the position of press, with 15% of overall ad spend, Hungary has a strong position among V4-members, he added.

As said above, the outdoor segment saw the biggest increase last year, in large part the result of price hikes: the construction levy for large billboards forced market players to raise prices, says Szilárd Szelei, head of Out of Hungary Home.

For the smaller, so-called city lights billboards, it is rather changing market practices that account for the increase, he added. Consumption has accelerated, therefore campaign goals are achieved within two weeks, as opposed to the previous one-month period, Szelei noted.