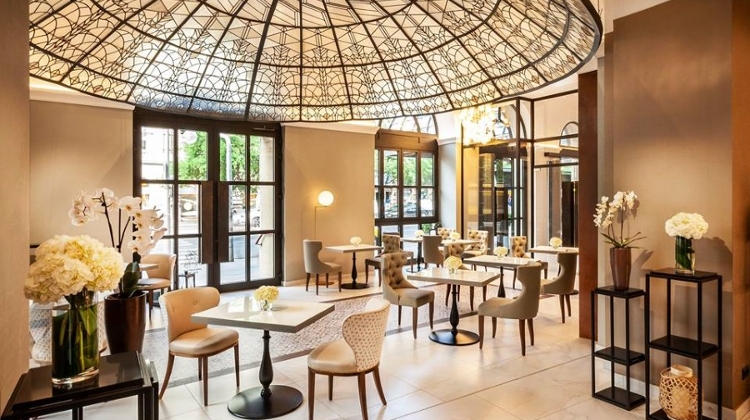 Fine porcelain, slim glasses and a sophisticated flair – Zsolnay Kávéház reopened its doors a year ago on the ground floor of the Budapest Radisson Blu Béke Hotel, and has been radiating new life and design-awareness ever since.

It’s transformation from a rather dusty hotel restaurant to a renowned gastro meeting point makes the place the Cinderella of Budapest cafés. Surely even Prince Charming would not refuse to have a piece of cake and a grey beef filet here.

Many people will remember the Radisson Blu Béke Hotel primarily due to the unusual mosaic decorating its façade, which depicts the life and deeds of György Szondi, the heroic knight captain who fought the Ottomans in the 16th century.

However, almost nobody knows that this hotel is one of the oldest in the Hungarian capital. It opened in 1913 – as Hotel Gellért, for example, was still under construction – under the name Hotel Britannia, operated by coffee tycoon Henrik Fábri.

It was considered the flagship of modern hospitality for a long time, offering running hot and cold water in all its rooms and central heating. Britannia was treasured among others by Ferenc Móra, one of the most popular writers of the era.

The hotel building survived World War II with many scars and was reopened as Hotel Béke (meaning “peace” in English) after a renovation. However, the house did not return to its full glamour until it was modernised again in 1985.

Reopening on the ground floor

The Zsolnay Kávéház was established around the same time. Its trademark, the same as today, was serving the meals and drinks in filigree Zsolnay dishes.

The world-famous Hungarian porcelain manufacturer created a very own flowery pattern for the café, and thus this cannot be found anywhere else in the world.

About a year ago Zsolnay Kávéház was still located temporarily on the hotel’s first floor while a full renovation was being carried out, after which it reopened in its former location on the ground floor in April 2018.

A Spanish designer, Nathalie Rottenburg, helped with the rebirth of the traditional café, which brought permanent changes. The cooperation was a success: with its fireplace, grand piano and open bar, the place radiates a welcoming homeliness.

The modern interior is organically divided into different functional zones and leaves nothing to yearn for in terms of comfort. All in all, this is a place where it feels good to stay.

A special highlight of its design is the glass dome decorating the entrance area, prepared by Jenő Haranghy, an Art Nouveau artist of the 19th century. It used to decorate the hotel’s ballroom, but during the course of the renovation they took apart the decorative element into a hundred or so pieces and reassembled it on the ground floor.

Even if the name does not imply it, Zsolnay Kávéház offers far more than only coffee and cakes. The restaurant combines a café, bistro and bar with a balanced and seasonally changing drink and menu card.

For instance, you can order a Japanese salad with soya cheese and spicy umami sauce. If you are looking for a more down-to-earth but still exciting appetiser, try the cauliflower cream soup with bourbon vanilla. One of the Hungarian specialties, the foie gras, is also recommendable.

The so-called “brinner” is a culinary specialty at the Zsolnay Kávéház. Just like the more common brunch, this term describes a meal that combines the best of breakfast and dinner.

Brinner is served throughout the whole day and you can choose from sweet and piquant compositions with eggs and butter croissants, and a selection of salads and sandwiches.

The true strength of the café is of course its artistically arranged pastries, cakes and desserts. György Bechmann, the chief pastry chef, always creates new sweet specialties for the café guests. 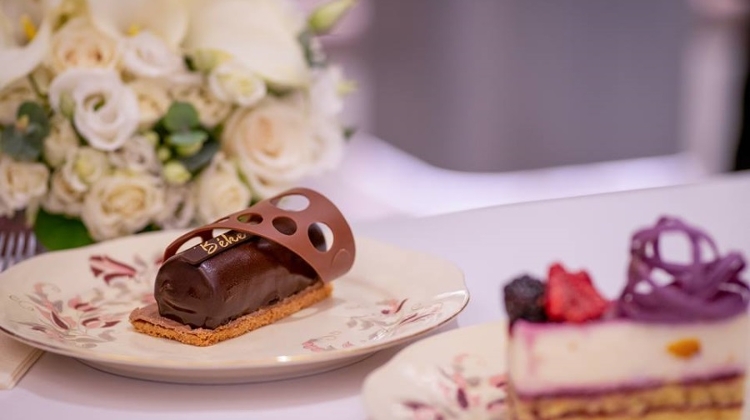 He also takes special nutritional needs into account – some of his creations are sugar-, lactose- or gluten-free.

Lúdláb is one of the mouth-watering eye-catchers – a chocolate cake, based on the original Hungarian recipe and recreated by Bechmann in a new shape.

The peach-cottage cheese slice, the colourful Maladipe cake and the Somlói dumplings (or Hungarian trifle) that you can mix yourself are all high-quality culinary delights.

Zsolnay Kávéház has a special offer – which is almost too good to be true – for its guests every Sunday around lunchtime.

Diners can receive a discount of 50% from the whole menu between 12.00 and 15.00 that day, which is valid for appetisers, main dishes, brinner and desserts. You had better reserve a table in advance.

Zsolnay Kávéház used to be a hidden pearl in the ocean of the Budapest gastronomy scene. One reason was that perhaps many people have a certain unwarranted reservation about restaurants seated in hotels, plus the café was not really visible.

Making a separate entrance to the Grand Boulevard is a great step to opening it up towards the metropolitan public.

Its central location and good connections make the Zsolnay Káváház a well-placed meeting point. The artistic yet professional atmosphere is especially recommended for business lunches and business meetings.

However, the restaurant is also absolutely right for family dinners and having a coffee with close friends.

By the way, they are dog-friendly and guests can park in the hotel’s underground car park for free.