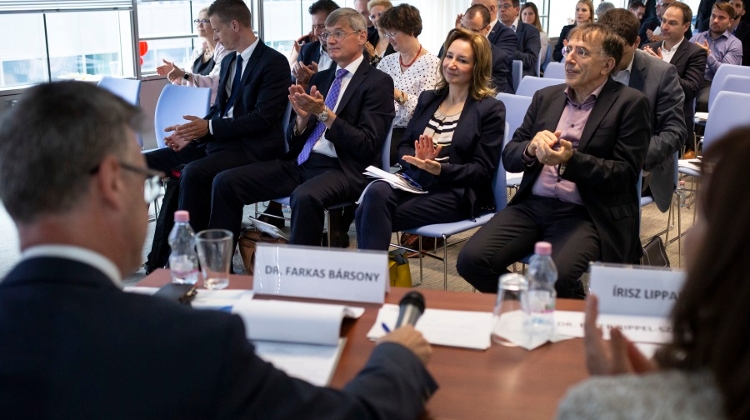 In the morning on May 22, AmCham held an extraordinary General Assembly with the objective to vote on the By-Laws proposals and revise the results of the 2018 financial year at the MetLife Hungary offices

The previous By-Laws – approved in 2016 –remained valid; however, it did not meet various legal requirements including the provisions for the set up and operation of the Supervisory Board.

On Wednesday, the AmCham Membership casted its votes on seven proposed amendments to the By-Laws, including three legally required changes, the regulations on the operation of the Supervisory Board, additional provisions on the expulsion of members and the rights of Honorary Members.

All seven proposed amendments reached the three-quarter supermajority required by the Civil Code for approval.

As of May 22, 2019, the Supervisory Board – elected at the 2018 Annual General Assembly with Dr. Andrea Jádi Németh as Chair of the Supervisory Board and David Young as the other Member – is approved and responsible for protecting and promoting the interests of the Chamber by ensuring compliance of the management and operation of the organization with applicable laws, the Constitution and the By-Laws of AmCham Hungary.

Additionally, more detailed provisions on the expulsion of Members were also accepted in order to guarantee a more transparent procedure, which now requires the two-third majority vote of the Board.

Furthermore, the By-Laws comply with the Act CLXXV of 2011 on the Freedom of Association, on Public-Benefit Status, and on the Activities of and Support for Civil Society Organizations, thus Honorary Members may attend the meetings of the Chamber, but they cannot vote nor run for office.

Should they wish to vote and be eligible for election, they can join the Chamber in any membership category, including Individual Membership without the discretion of the Board.

AmCham’s legal partner Siegler Bird&Bird Law Office, the legal experts in the Board and elected Supervisory Board evaluated all legal possibilities regarding rights and obligations of Honorary Members and consulted all impacted parties in the last four months. The By-Laws changes accepted yesterday were the result of these discussions.