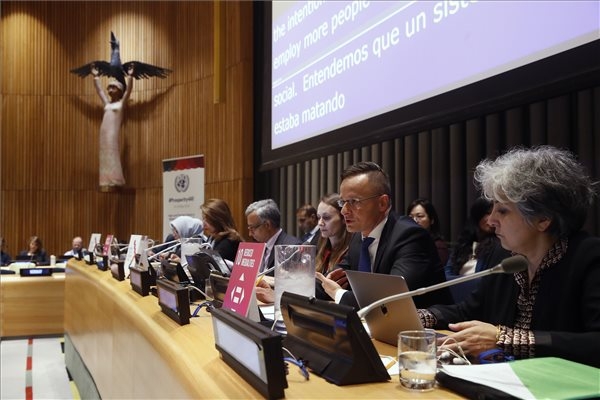 The European Union and the United Nations should stop pressuring Hungary to adopt “failed” models concerning migration as the “Hungarian model” has in recent years become an international success story, Hungarian Foreign Minister Péter Szijjártó said at a meeting of the UN’s Economic and Social Council (ECOSOC) in New York.

“Migration-based” economic and social policies have regularly failed in Europe in recent years, the minister said.

They have led to “parallel societies” which exacerbated social tensions and security risks, he said, while failing to yield the expected economic benefits.

The Hungarian government sees the support of families as the right answer to the demographic and labour market challenges Europe, and in particular its central region, are facing, he said.

The Hungarian model, “through enormous efforts”, has preserved the country’s security and helped to “take the help where the troubles are”, the minister said.

The Hungarian government finds it unacceptable that Brussels or New York puts the country under pressure, Szijjártó said.