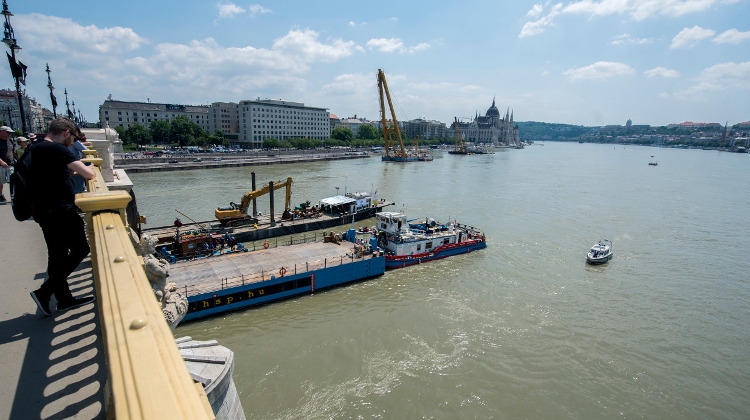 Hungary’s authority for air transport has restricted the country’s airspace above a section of the Danube with a view to preventing the disruption of recovery efforts following last week’s ship collision on the river, counter-terrorism force TEK, which is in charge of the salvage efforts, said on Sunday.

The restricted zone extends from about 1 km north of Budapest’s Árpád Bridge down to the city of Paks, about 100 km south of Budapest, and in about a 2-kilometre radius east and west of the river, TEK said in a statement.

The restriction also applies to drones, it added. Meanwhile, TEK noted that preparations to raise the wreck of the sunken sightseeing boat are ongoing.

Two harnesses have already been installed onto the wreck and are being stabilised, the statement said.

The body of the 20th victim of last week’s Danube ship collision has been identified, Budapest police said on the website police.hu on Sunday.

The South Korean woman’s body was found south of Budapest on Saturday afternoon. Sightseeing boat Habláany collided with a cruise ship and sank on May 29.

It had 33 South Korean tourists on board and a crew of two Hungarians. Seven tourists were rescued from the water after the collision.

The bodies of 19 tourists and one of the Hungarian crew have been found and identified, while a search is still under way for 8 missing persons.