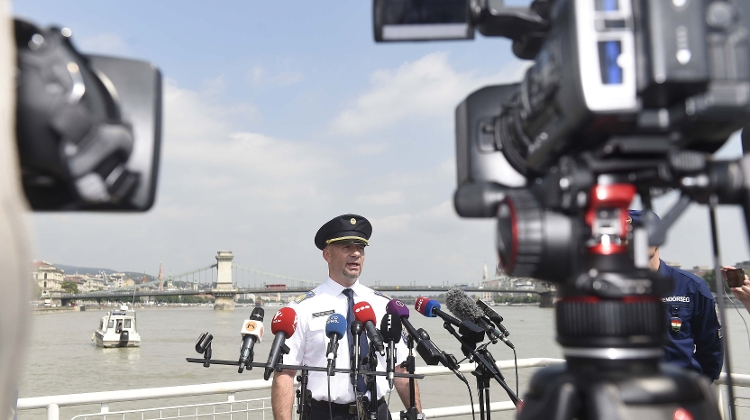 The Budapest Metropolitan Police Headquarters is examining all the circumstances of the boat accident, which happened on 29 May 2019, in accordance with the rules of Hungarian criminal procedure, a spokesman has announced.

Budapest Police Detectives, in cooperation with the Prosecutor’s Office and with the participation of experts, concluded the inspection of the raised boat and found no other bodies in it.

Budapest Police noted they recently opened a new crime scene investigation on the ’Viking Sigyn’ which was involved in the accident that occurred on 29 May.

This is to search for further evidence and to clear up the circumstances of the crash, as in the afternoon hours of 10 June the ’Viking Sigyn’ arrived again in Hungary according the ship's schedule.

A passenger boat named Hableány and a hotel cruise ship named Viking Sigyn collided on the Budapest section of the Danube next to a pillar of the Margit Bridge close to the Pest side at 21:05.

The first criminal unit arrived to the scene within 14 minutes of the notification - the first water police unit was involved in the search and rescue operation practically at the same time as the civilian notification was made.

The investigators of the Budapest Police Headquarters breathalysed the captain of the hotel ship involved in the accident, C. Yuriy (64), an Ukrainian citizen from Odessa.

They questioned the crew and all passengers. Among others, they seized the captain’s telecommunication devices, the server of the hotel ship, the data carriers which recorded the data of the radar screen and the entire radio communication, all AIS data.

Upon arrival at the scene of the search and rescue operation, due to the high profile of the case, the Minister of Interior decided to set up an investigation team in order to comprehensively yet quickly investigate the circumstances of the accident.

Police officers questioned 230 persons in relation to the water accident, additional 66 were interrogated as witnesses, and one person as a suspect.

The minutes of the interrogations  - which took place in 15 interrogation rooms over 124 hours, with the support of six translators for the interrogation of the witnesses and the suspect who did not speak Hungarian - exceed five hundred pages; the complete case file is over one thousand pages.

The 38 service cars at the disposal of the investigation team drove 958 kilometres.

The captain of the hotel ship, C. Yuriy, arrested and interrogated under suspicion of misconduct of endangering the water traffic resulting in mass manslaughter has not given any explanatory statement about the circumstances of the accident during his continuing interrogations.

The members of the investigation team are continuously reviewing ten thousands of data from different databases, the seized records of 16 CCTV, and the video and camera records handed over to the police by citizens upon request.

With the support of judicial and nautical experts, the police inspected the hotel ship, seized camera records and took 4.896 digital photos.

All data content of the shipping and information systems found on the hotel ship were seized. The inspection took more than eight hours and altogether more than 2 Tb data were seized.

For a comprehensive investigation, the investigators contacted all co-authorities of the Danube states and the Dutch Police.

In order to ensure the effectiveness of the investigation, to analyse and evaluate the personal and material evidences obtained, and to answer the specific questions emerging during the investigation, the police appointed also IT, medical, psychological, optometric, traffic, hydrological, professional aptitude and labour experts and consultants in addition to the formerly detached nautical judicial expert.

The commissioner of the Budapest Metropolitan Police has a briefing with the head of the investigation team and the line managers twice a day. All personnel and material conditions are at disposal to conclude the investigation successfully.