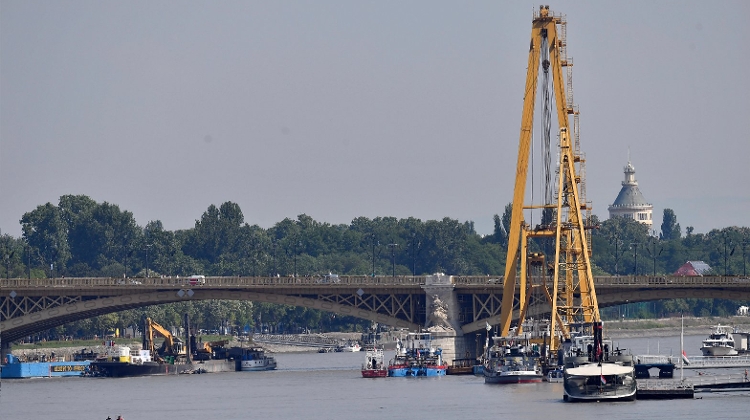 Attempts to hoist the wreck of the sightseeing boat which collided with a large cruise ship and sank in the Danube in central Budapest are expected to begin this week, counter-terrorism force TEK, which is in charge of the recovery efforts, said on Saturday.

Recovery teams have successfully sealed all of the boat’s openings in order to prevent any bodies from falling out of the wreck while it is being lifted, TEK official Nándor Jasenszky said.

The salvage team will install the harnesses onto the wreck on Sunday, he added.

Meanwhile, Jasenszky said a German foundation that has offered to provide search dogs to help locate the remaining victims has been taken to Paks, in central Hungary, to assist the search efforts there.

The body of a woman has been recovered from the River Danube on Saturday by the town of Érd near Budapest, an official of counter-terrorism force TEK, which is in charge of the recovery efforts, said on Saturday.

The woman is presumably another victim of the ship collision on May 29, Nándor Jasenszky told news channel m1.

Should her identification confirm that she was a passenger on the sightseeing boat Hableany, the number of those still missing would be down to eight, he said.

For that matter, the Hungarian embassy in Seoul has received numerous messages from South Korean citizens expressing their gratitude for the work carried out by Hungarian authorities and the solidarity shown by the Hungarian people in connection with last week’s Danube boat collision, a foreign ministry official said on Saturday.

Multiple letters have praised the work of the Hungarian rescue teams, while many Koreans said they had been moved by the candles and memorial objects left on the bank of the Danube in memory of the victims, Tamas Menczer, state secretary for communications and international representation, said in a Facebook post.

“We’re continuing to do whatever we can to ease the pain of those affected [by the disaster],” Menczer said.

The Ukrainian captain of the Viking Sigyn cruise ship that collided with a sightseeing boat in Budapest last week has not yet given investigators a detailed account of the circumstances of the crash, the Budapest Police Headquarters (BRFK) said on Saturday.

The 64-year-old captain was questioned under suspicion of causing the disaster and detained last Thursday. The Budapest municipal court later ruled that he be remanded in custody for the duration of one month.

BRFK said in a statement that police had carried out a breathalyser test on the captain and questioned the cruise ship’s crew and passengers.

They seized the helmsman’s communications devices, the ship’s server, devices containing the ship’s radar and radio transmission data, as well as all AIS data. Police have questioned a total of 230 people as part of their investigation.

The statement notes that Interior Minister Sándor Pintér has set up an investigative unit tasked with looking into the disaster.

The team’s members have worked a combined 6,180 hours since the evening of the accident, the statement said. Investigators are also in contact with the law enforcement authorities of all Danube region countries as well as that of the Netherlands.

Sightseeing boat Hableany collided with the Viking Sigyn and sank on May 29.

It had 33 South Korean tourists on board and a crew of two Hungarians. Seven tourists were rescued from the water after the collision.

The bodies of 18 tourists and one of the Hungarian crew have been found and identified, while a search is still under way for 9 missing persons.